What: MercadoLibre, Inc. (NASDAQ:MELI) stock appreciated 33.9% from the beginning of the year through July 31, according to data from S&P Global Market Intelligence. The Latin American commerce giant's shares have reversed course in decided fashion after opening the year in the red: 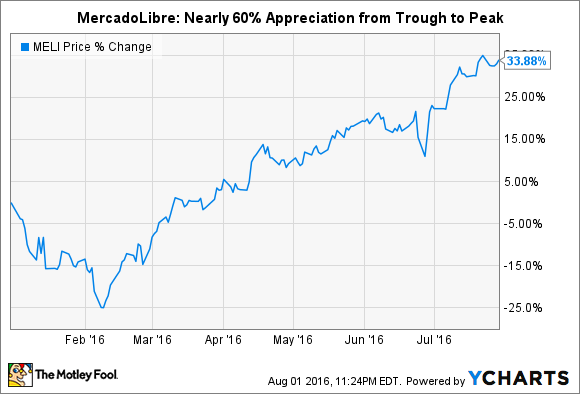 So what: A pair of strong earnings reports can be credited for the success of the "MELI" ticker so far in 2016. As is visible in the chart above, the company's fourth-quarter 2015 report, released on Feb. 26, catalyzed MercadoLibre's months-long climb.

For an example of the type of statistics which have caught investors' attention, consider the Q1 2016 report, released on May 5. The company's net revenue for the quarter increased 75%. Even after accounting for foreign-currency translation within some of the most inflationary economies in the world (namely, Brazil, Argentina, and Venezuela), MercadoLibre was still able to book a 6.7% net revenue gain in its reporting unit of U.S. dollars.

Gross merchandise volume, or GMV, a measure of total dollar volume of items sold in the MercadoLibre marketplace, grew 8%, to $1.8 billion, in the first quarter. Excluding Venezuela, GMV gained 58% on a forex-neutral basis.

In yet another specific instance of headlong growth, Mercado reported a jump of 114% in total items shipped through its Mercado Envios shipping service, to 17.2 million units. Management noted that most of this growth came from Brazil, where roughly 70% of Mercado's platform sales used the shipping solution.

Now what: If you've followed MercadoLibre for a while, you're familiar with extremely healthy metrics like those above. So what's providing the stock price uptick in 2016? Simply, Mercado is demonstrating that it can counterbalance rapid growth in high-inflation economies with market penetration in more stable, robust economies, for example, Mexico and Chile -- both of which management recently cited as promising growth markets.

This diversification is bolstered by a long-term trend in which marketplace-based merchandise sales are increasingly supplemented with profitable revenue streams, such as payments, shipping, and advertising services. The two factors together have allayed investors' primary fears so far this year.

Looking ahead, MercadoLibre's swift 2016 rise has pushed its valuation up to a steep 56 times forward one-year earnings. Will the company's second-quarter results support this multiple or slow Mercado shares temporarily? We'll find out soon enough, as the organization is scheduled to report earnings this week, on Aug. 4, after the close of trading.

MercadoLibre Shares Have Soared 34% So Far This Year: Here's Why @themotleyfool #stocks $MELI Next Article
Current