What: Shares of Fitbit (NYSE:FIT) jumped on Wednesday following the company's second-quarter report. While profits plunged due to higher spending, Fitbit produced better-than-expected revenue growth. At 11 a.m. ET, the stock was up about 10%.

So what: Fitbit reported second-quarter revenue of $586.5 million, up 46.5% year over year and about $8.5 million higher than the average analyst estimate. The company sold 5.7 million devices during the quarter, up from 4.5 million during the same period last year.

New products -- which include the Blaze, Alta, and related accessories -- generated 54% of revenue. Two-thirds of activations of Blaze and Alta devices came from new customers, suggesting that Fitbit is still growing its user base rapidly.

Non-GAAP EPS came in at $0.12, down from $0.21 during the prior-year period but $0.01 higher than analysts were expecting. Major increases in spending drove down the company's profits, with R&D spending jumping 162% year over year, and sales and marketing spending rising 70%. The company is investing heavily in product development in an effort to stay ahead of the competition.

Fitbit reiterated its full-year guidance, which calls for revenue between $2.5 billion and $2.6 billion and non-GAAP EPS between $1.12 and $1.24. 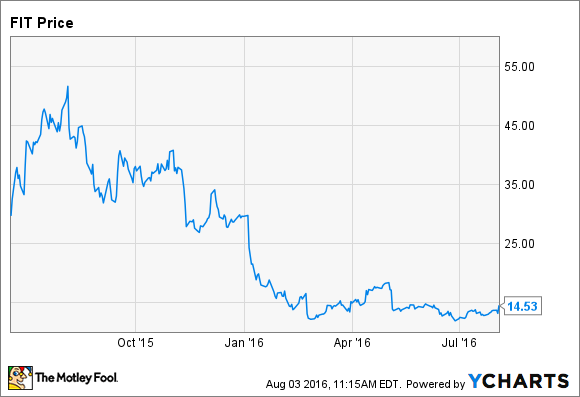 Now what: Shares of Fitbit have been beaten down since the company's IPO on fears that competition from more capable devices would eventually upend the fitness band market. That hasn't happened yet, and Fitbit is pouring money into R&D to make sure it doesn't happen at all.

The second half, particularly the holiday season, will be the real test of Fitbit's strategy. New products are expected before the holidays, and Fitbit will need them to be hits in order to achieve its guidance. With the stock jumping 10% on Fitbit's results, investors have become a little more optimistic about the company's future.