A decades-long history of annual dividend increases is a good indicator of a high quality company. That kind of consistency often comes at premium: Many "dividend aristocrats" trade for lofty valuations. Some do stand out as great deals, though -- and three of our Foolish contributors are happy to share a few of them with you.

Drilling down for deals

Todd Campbell: This month might be the right time to step up and buy shares in ExxonMobil (NYSE:XOM), the global energy powerhouse.

Until recently, shares in ExxonMobil had been recovering some of the  ground lost in the past year due to lower oil and gas prices, but that rally got derailed in mid-July when oil prices lost their footing again. 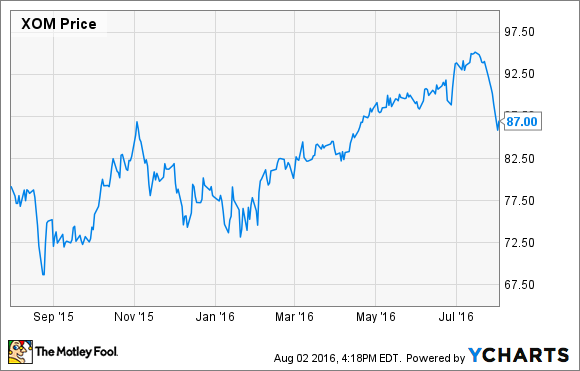 While no one can predict where oil and gas prices are heading from here, including ExxonMobil in long-haul income portfolios may be savvy. The company is involved in all aspects of energy production, from drilling to retailing, and that diversification has allowed it to rack up an impressive dividend history despite the industry's inevitable pops and drops. Over the past 33 years, the company has increased its dividend by an average of 6.4% annually.

Since ExxonMobil continues to make money in spite of the weak oil and gas markets (second-quarter earnings totaled $1.7 billion), it has financial flexibility to hunt for bargains as peers stumble. Its Goliath status also means it has the firepower to keep dividends flowing. Overall, if investors are looking to add a top dividend-paying stock to their portfolio on the cheap, this company may be perfect.

Tim Green: Most dividend aristocrats demand a substantial premium, but retailer Target (NYSE:TGT) is an exception. Analysts are expecting the company to produce earnings of $5.14 per share this year, and the stock price is now at about 14.7 times that number. That's well below the P/E valuations given to many other dividend aristocrats.

Target announced a 7.1% quarterly dividend increase back in June, marking the 45th consecutive year in which Target has raised its dividend. The stock carries a dividend yield of about 3.2%, based on the most recently announced payment, quite a bit higher than the 2.75% yield offered by fellow retailer and dividend aristocrat Wal-Mart.

Target's valuation is lower than most dividend aristocrats now for a good reason. The company's revenue has been stagnating over the past few years, and its operating income has been essentially flat for the past decade. Per-share profits have increased mostly due to share buybacks, as both gross and operating margins have contracted.

Based on these factors, Target stock is far from a bargain. But given the consistency of its dividend increases over the past four decades, Target is worth a look in August for dividend investors.

Neha Chamaria: If you haven't considered adding Illinois Tool Works (NYSE:ITW) to your portfolio yet, it's time to pay attention. Before I tell you why I'm particularly excited about this dividend aristocrat now, here are two mighty facts to consider:

So how does Illinois Tool Works afford a higher dividend year after year? By growing its cash flows even during difficult times, thanks largely to a diversified product portfolio that helps mitigate business risks. Take a look at how the conglomerate's cash flows have surged in the past five years despite the wild swings in profits. 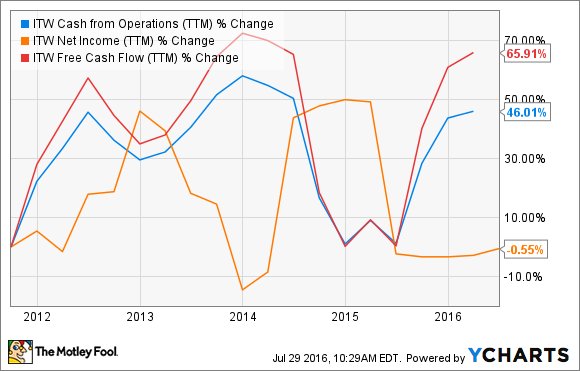 Those cash flows should only head north if the company's operational performance so far this year is anything to go by. At a time when most industrial companies' profits are taking a hit, Illinois Tool Works just upgraded its full-year guidance for the second time, and now expects its earnings per share to grow a solid 9% at midpoint compared to 2015. At this growth rate, even if Illinois Tool Works wants to stick to its current dividend payout ratio of 40%, it can still easily bump up its dividend per share by 16%. Of course, there's tremendous room for upside if the company decides to pay out more to shareholders. Long story short, I don't see this dividend going anywhere but up in the years to come.