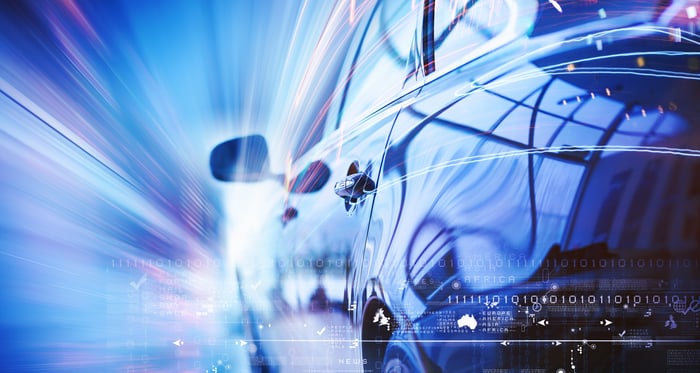 NVIDIA (NASDAQ:NVDA) is best known for its graphics processing units (GPUs) and its graphics cards used for gaming. But the company also has a strong -- and growing -- automotive segment that's quickly becoming a major part of the company's future.

The company earned $113 million from its automotive segment in fiscal Q1 2017. That's not all that much, but it's an increase of 47% year over year, and it brings automotive revenue up to about 8.6% of total revenue.

Some key players in the automative industry are betting on NVIDIA's automotive technologies, including BMW (OTC:BAMXF), Tesla Motors (NASDAQ:TSLA), Honda Motors (NYSE:HMC) and Volkswagen (OTC:VWAGY). Here's how each company is using NVIDIA's GPUs and semi-autonomous car technology to further their businesses:

Tesla stockholders are likely well aware of NVIDIA's partnership with the electric-car maker, as well. Tesla has the largest touchscreen display of any car (17 inches), and it's powered by NVIDIA. Additionally, Tesla's all-digital 12.3-inch instrument cluster display uses NVIDIA's GPUs.

Honda also uses NVIDIA's Tegra processors for its Honda Connect infotainment system, along with its app center, where users can download apps, music, and podcasts directly to their vehicles.

There's much more to this than infotainment displays

GPU-powered infotainment systems are good, but NVIDIA's direction for its automotive segment is quickly transitioning to a driverless-car focus. The company is already on the second version of its Drive PX self-driving platform (powered by its GPUs, of course).

Drive PX uses artificial intelligence to not only allow cars to drive themselves, but also learn new driving techniques based on their experiences. For example, Drive PX recently learned how to navigate 3,000 miles of road in just 72 hours.

BMW, Ford, and Daimler are all using NVIDIA's Drive PX, or are at least testing it, and Volkswagen's luxury unit, Audi, has probably used NVIDIA's technology the most. The company's used NVIDIA's GPUs to help pilot some of its self-driving vehicles in the past, and says that the new Drive PX will make its self-driving features even smarter.

The automaker said earlier this year that the deep-learning (a subset of artificial intelligence) capabilities of Drive PX allowed its vehicles to learn certain self-driving capabilities in four hours instead of the two years that it took on competing systems. NVIDIA's director of automotive, Danny Shapiro, said in an interview with Automotive News Europe last month that Audi is the primary brand they work with, "... but then it permeates through the Volkswagen Group. Once it is developed with Audi, it moves into Volkswagen, Seat, Skoda, Lamborghini, and Bentley."

NVIDIA's technology is already in 10-million cars on the road today, but the dissemination of technology between car brands (like Audi's doing) could eventually put NVIDIA's GPUs and its Drive PX platform in many more vehicles.

Tesla's co-founder and CEO, Elon Musk, has promoted NVIDIA's GPUs as a key element for driverless car technology. At the 2015 GPU Technology Conference last year, Musk said that what NVIDIA is doing with its Tegra GPU's will prove "really important for self-driving in the future." While Tesla uses NVIDIA's GPUs, it doesn't currently use NVIDIA's Drive PX system, though there's no reason why it couldn't in the future.

Why all of this matters for NVIDIA investors

NVIDIA's self-driving car focus is becoming increasingly important because of the technology's quick adoption by both automakers and consumers. IHS Automotive estimates that between now and 2035, there will be 76 million vehicles on the road with some level of self-driving capabilities. Cheaper technology is spurring growth, as is evidenced by Honda's $20,040 Civic, which can drive itself on the highway.

The driverless-car market is expected to grow to $42 billion by 2025, according to Boston Consulting Group, and it's clear that NVIDIA's mapping out a plan to grab as much of that market as possible with its current automotive partnerships.