What: Shares of SeaWorld Entertainment (NYSE:SEAS) tumbled on Thursday following the release of the company's second-quarter report. Weak traffic led the company to miss revenue expectations, sending the stock 14% lower by 10:30 a.m. ET.

So what: SeaWorld reported second-quarter revenue of $371.1 million, down 5.2% year over year and about $3.7 million lower than analysts were expecting. Attendance during the quarter was down 494,000 guests, driven by a shift in the timing of holidays, softness in the Orlando market, and Tropical Storm Colin. Parks outside of Florida fared better, with Texas revenue up 2% year over year, but it wasn't enough to counteract weakness in Orlando.

While attendance fell, growth in per-guest spending helped the company's results. Total revenue per capita rose to $62.02, up from $60.45 during the prior-year period. Admission per capita rose 1.7% year over year, while in-park per capita spending rose 4%.

Non-GAAP EPS came in at $0.21, down from $0.22 during the prior-year period and in line with the average analyst estimate. The company managed to reduce its expenses during the quarter, which helped to keep the earnings decline in check.

Now what: SeaWorld's weak second-quarter report has caused the stock to hit a new all-time low. Since going public in 2013, the stock has shed about 60% of its value. 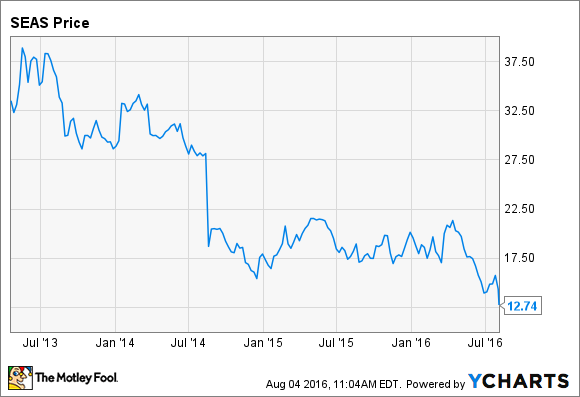 The company has been suffering from declining profitability since its IPO, and 2016 may be the worst year yet based on results from the first half. Events outside of SeaWorld's control contributed to a weak second quarter, but the problems at the company clearly run deeper.