So what: FireEye reported second-quarter revenue of $175 million, up 19% year over year but about $6.6 million below the average analyst estimate. Billings rose just 10% year over year, to $196.4 million, well below the 23% growth posted during the first quarter.

In addition to reporting slower-than-expected revenue growth, FireEye slashed its guidance for the full year.

Now what: Once a fast-growing company valued at over $11 billion, FireEye is now worth just $2.45 billion after Friday's plunge. The stock has lost 85% of its value since peaking in early 2014. 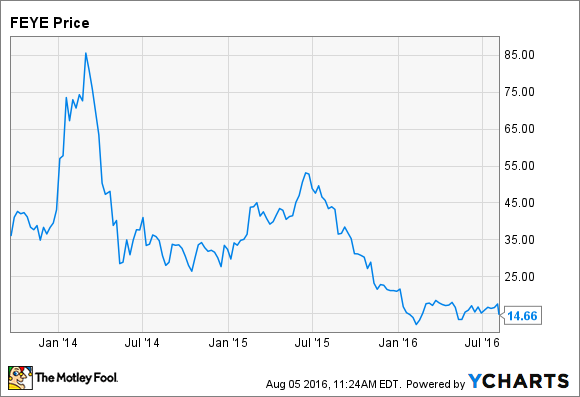 FireEye's strategy up to this point has been to spend heavily on research and development, and sales in order to drive growth. The company has produced massive losses in the process, but revenue growth has impressed until recently. With FireEye now growing at a far slower rate, it can no longer justify its exuberant spending. CEO Kevin Mandia explained how the company's strategy will differ going forward: "We still have much work to do, but I am convinced that FireEye has the critical assets necessary for long term success, and that we are taking additional steps to achieve balanced growth and profitability."

FireEye has become big enough that it can no longer produce the kind of growth that it has achieved in the past. The company will eventually need to figure out how to turn a profit, something that investors will likely care more about going forward in light of the slowing growth.