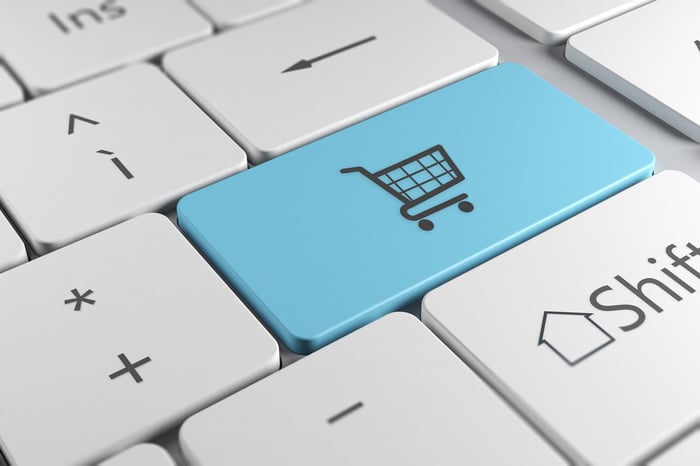 Amazon.com (NASDAQ:AMZN) has to be in the running for the greatest story in American business over the past 20 years. The scrappy online bookstore has transitioned from a niche player in retail to one of the most innovative and influential players in the entire industry. As a result of Amazon's success, founder and CEO Jeff Bezos is the fifth richest person in the world, with an estimated net worth of $45 billion.

If you were lucky enough to participate in Amazon's $18-per-share IPO in 1997 and held the investment through three stock splits, turning one share into 12, you'd be sitting on gains of approximately 50,600%. Presented another way, an investment of $2,000 would have made you a pre-tax millionaire. A natural question is, does this company have any gains left after this amazing run? Here are two reasons Amazon can continue to reward investors.

We're still in the beginning phases of e-commerce

Perhaps one of the biggest misconceptions investors have about Amazon is the company's runway for growth. The following chart outlines e-commerce in the United States as a percentage of retail sales and annual growth for the past decade. There are two quick takeaways from this chart. The first is that e-commerce is continuing to grow at a rapid clip, increasing from 13% to 15.4% on a year-on-year basis since 2014. The second is that e-commerce is still a minor part of overall commerce. On a quarterly basis, the highest mark set was the 8.7% registered during the fourth calendar quarter of 2015.

Look at the entire chart and another pattern becomes apparent. On an annual basis, e-commerce as a percentage of retail spending tends to peak annually during the fourth fiscal quarter, the holiday shopping season. Not only is it good for Amazon, the United States' largest e-commerce company, to see this peak happen during high-volume shopping times, but it also suggests a convenience factor that portends a continued shift to e-commerce.

In the past decade, e-commerce has increased from 3.5% of total retail sales to 7.7% in the preliminary estimates of Q1 2016. While estimates vary as to what's the long-term level, it's likely a good deal higher than current percentages. As e-commerce continues to post mid-teens year-on-year growth rates, Amazon should naturally continue to grow as well.

Amazon Web Services is growth and margins in one package

To the average consumer, Amazon is simply known as an online retailer. To investors, however, Amazon Web Services, or AWS, is quickly replacing its core business as the reason to own the investment. And it makes sense. As of last quarter, Amazon reported first-half revenue for AWS at $5.45 billion, nearly 61% higher than last year's corresponding total. Overall, Amazon grew total revenue a respectable 30% during this period to $59.5 billion.

More interesting, however, are AWS's effects on operating income. For the first six months, Amazon produced $2.36 billion in operating income. Of that figure, $1.32 billion was generated from AWS. The unit thus accounts for 9% of Amazon's top line but over 50% of the company's operating income. Unlike low-margin retailing, cloud computing services are high-margin and scalable.

The knock against Amazon is it trades at nosebleed valuations. Even now, the company's price-to-earnings ratio is approaching 200, versus the greater S&P's 25. Long story short, Amazon needs to continue growing its bottom line to keep patient investors happy. That said, favorable tailwinds from both its core U.S. retailing business and from its high-margin cloud services should allow the company to continue to grow its top and bottom lines.

Is It Too Late to Get Into This Millionaire-Maker Stock? @themotleyfool #stocks $AMZN Next Article
Current