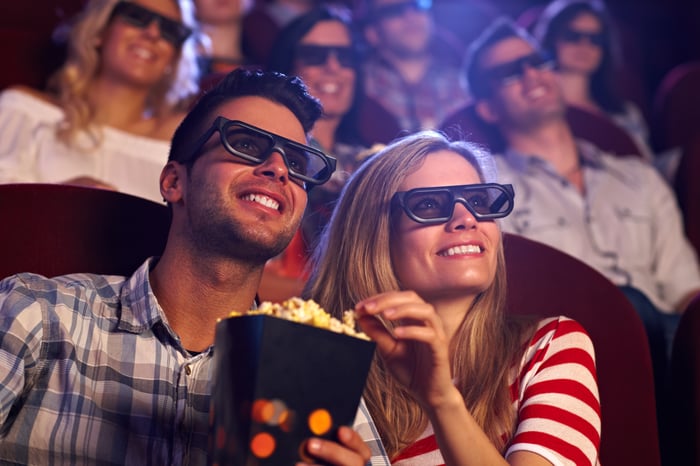 There wasn't much to smile about at the movies this year, but AMC Entertainment is on track to become the world's biggest theater operator if it completes its purchase of Carmike Cinemas. Image source: Getty Images.

Movie theater operator AMC Entertainment (NYSE:AMC) says it doesn't need to acquire rival Carmike Cinemas (NASDAQ: CKEC), especially if its shareholders are going to get all huffy about how much it's willing to pay, but after reporting second-quarter earnings that showed revenues falling 7% as admissions and food and drink sales fell, maybe AMC needs the chain more than it's willing to admit.

Sitting in the cheap seats

AMC offered to buy Carmike in March for $30 a share, or about $1.1 billion, a near 20% premium from where it had closed the day before the deal was announced, a merger that would create the largest movie theater chain in the U.S., with 8,380 screens across 600 locations in 45 states.

But Carmike balked as its largest investors, who represent 20% of its stock, along with several institutional investor advisory companies, said they opposed the deal. Both Mittleman Brothers and Driehaus Capital Management, along with Institutional Shareholder Services and proxy firm Glass, Lewis, said the offer undervalued the theater operator. Although many felt $40 per share was an appropriate valuation -- though Mittleman put the value north of $47 a share -- analysts said another $3.50 ought to be sufficient to bring everyone around.

Last month, though, AMC returned with what it declared was its "best and final offer," a grudgingly offered additional $3.06 per share. And whereas the original bid was an all-cash offer, the revised bid was now split 70/30 between cash and AMC stock.

AMC's CEO and President Adam Aron also said Carmike shareholders shouldn't trifle with him because he's ready to walk away if need be.

"While we would like this transaction to go forward," Aron said in a statement, "We are fully prepared to focus instead only on the improving fortunes of AMC and on our Odeon & UCI acquisition in Europe if a majority of Carmike shareholders do not find this revised offer attractive."

Aron was referring to the deal AMC made in mid-July to acquire Odeon & UCI Cinemas Group for $1.2 billion. Now, even without Carmike, AMC can still become the world's biggest theater chain operator.

AMC is owned by China's Dalian Wanda Group, which purchased the company in 2012 for $2.6 billion. Although AMC has as one of its goals to be the leading U.S. theater owner, China is poised to soon surpass the U.S. as the world's biggest market for theaters.

Having made the deal for Odeon, Aron's become even more dismissive of Carmike's standoffishness. "There is only one thing that I am certain of in life," Aron was quoted as saying, "They are not going to get $40 a share from AMC."

Perhaps, but AMC and the movie industry in general are suffering. Aron insists his chain's poor performance was a one-off event because Hollywood can't produce decent movies. He said the entire the industry's wide box office revenue was down nearly 11% domestically per screen from the year-ago period, so don't hold it against AMC if Hollywood sucks, basically.

Yet the Carmike deal would still put AMC in a better position globally, allowing it to be stronger on pricing as well as controlling costs. Here in the U.S., it would also give it a competitive advantage over current industry leader Regal Entertainment (NYSE: RGC), which has about 7,300 screens. Cinemark Holdings (NYSE:CNK) is the third largest theater operator with about 4,500 screens, while Carmike is fourth, with some 3,000 screens.

Even so, while AMC might need Carmike more than it lets on, it also indicates Carmike might need to get this deal done, too, and taking too hard of a stance could work against it and put it further behind the competition.

AMC's Aron is looking for things to turn around from here on out, and he pointed to industry box office revenues rising more than 7% through July 29. Coupled with the potential for a slew of blockbusters to hit the screens next year, including a new Transformers film, a King Kong reboot, and the next Star Wars franchise installment in December, AMC ought to be sitting pretty -- with or without Carmike Cinemas.

Still, it can't be denied that AMC would be better off with the rival chain, which is the only one of a size that could be acquired without running afoul of antitrust regulators. Though AMC and Aron really may be willing to walk away if Carmike's shareholders raise too much of a stink, they also know they not only want, but actually need the chain if they are to realize their goal of becoming the leading operator of U.S. movie theaters.