It's hard to find a company in the oil and gas market that you could say is doing well today, but Summit Midstream Partners' (NYSE: SMLP) second quarter results show that the company is holding up better than most in this down market, thanks to its business model. Let's take a look at the comapny's most recent results to see how Summit Midstream has been able to keep its business steady in the stormy oil and gas market.

For the most part, Summit Midstream posted pretty solid results. The company did take a couple non-cash charges related to asset impairments and reevaluating some equity investments, but on a cash basis the company saw continued progress. In fact, management raised guidance for its adjusted EBITDA midpoint for the year and even increased its distribution coverage guidance for the year from 1.10 times - 1.20 times to 1.15 times - 1.25 times.

The biggest driver of the year-over-year gains is from the company's Utica shale and Williston Basin assets, which offset modest declines in volume and EBITDA from its other segments. These assets, which were dropped down to Summit from its general partner in the first quarter of the year, have been the largest driver of the company's results, as its organic capital spending has been modest. 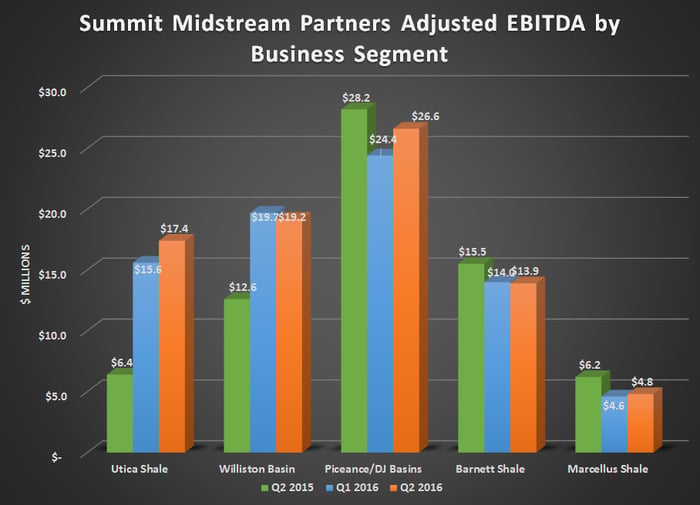 It was actually a pretty quiet quarter for Summit in terms of news or operational changes, which is pretty much good news in and of itself. Although the company has a pretty small asset portfolio, it has a relatively well-protected cash flow, thanks to 98% of its contracts coming from fee-based services. It's also helpful that the company is leaving some wiggle room in its finances by retaining some distributable cash flow to help pay for growth. So far in 2016, the company has retained about $20 million in cash that was available for distirbution. If it maintains that pace, it would cover 20% to 25% of its capital spending budget for the year.

One thing that CEO Steve Newby wanted to stress in the company's press release is that the company's earnings and cash flows are relatively well protected thanks to a fee-based structure with lots of minimum volume commitments. These commitments have helped to keep EBITDA levels across its segments rather steady compared to the declines in volumes and drilling activity in these respective basins.

Given our exposure to a vast acreage position spanning the condensate, liquids-rich, and dry gas windows of the Utica Shale, we continue to be optimistic about our prospects for continued volume and segment adjusted EBITDA growth from these assets. Overall, the assets included in the 2016 Drop Down transaction, which include our Utica, DJ, and additional Williston gathering systems, continue to perform in-line with the expectations we laid out at the time of the drop down.

Our Piceance, Barnett, Williston, and Marcellus assets are performing ahead of our prior expectations in the current commodity price environment and are benefiting from our fixed-fee business model and high level of long-term contractual underpinning in the form of minimum volume commitments. These minimum volume commitments are performing as designed, providing SMLP with a high degree of cash flow stability during a period when challenging commodity prices are resulting in lower drilling activity and causing volumes from certain of our customers to decline or growth to slow.

From an operational standpoint, Summit Midstream Partners' results were relatively solid, despite the declines we have seen in oil and gas production across the U.S. If the company can continue to generate these kinds of results, then investors should be pretty satisfied.

The big question for Summit Midstream in the future is how it plans to pay the remaining outstanding amount on that drop down from the first quarter. The company paid its general partner $360 million as an initial payment. The remaining payment -- $800 million to $900 million -- has been deferred to 2020. If it decides to pay for the rest of this purchase in shares instead of cash, then investors will see some pretty significant dilution. In the coming quarters, investors should check in with management to see if they drop any hints as to how they want to pay. Any uncertainty related to this payment is likely going to overshadow what are some pretty solid operational results.