Welltower (NYSE:WELL) reported second-quarter earnings that slightly exceeded expectations on both the top and bottom lines, and continued its streak of predictably strong performance. Here's an overview of Welltower's quarter, and if now is still a good time for investors to come aboard.

Welltower reported funds from operations (FFO) of $1.15 per share for the second quarter -- $0.01 above analysts' estimates and 6% higher than a year ago. Revenue came in slightly better than expected as well, at $1.08 billion versus expectations of $1.04 billion.

There were no other major surprises in the numbers. Funds available for distribution grew by 9% year over year to $1.04 per share, more than enough to cover Welltower's $0.86 quarterly dividend. Portfolio occupancy increased by 1% to 90.3%, and continued progress was made to transition the portfolio away from dependence on government insurance programs and toward more predictable private-pay revenue sources.

As the company previously announced, Welltower successfully closed on a new $3.7 billion credit facility, which lowers its cost of borrowing by 2.5 basis points and also provides an additional $500 million of available borrowing capacity.

The company's net income will be significantly higher than expected this year, mainly due to one-time items, such as increased guidance of $1.3 billion in dispositions at a yield on proceeds of 9.3%. FFO guidance of $4.50 to $4.60 per share hasn't changed, nor has the range of funds available for distribution (FAD) of $3.95 to $4.05. However, it's important to mention that these guidance ranges assume no further acquisitions, dispositions, or other transactions beyond what has already completed or announced, so it's always possible this could change slightly in the second half.

Although it wasn't a huge surprise given Welltower's rapid growth over the past few years, one thing investors should definitely notice from the second quarter earnings report is the $1.15 billion acquisition announcement of a portfolio of 19 properties from Vintage Senior Living. All of the properties are located in California or Washington, and will be managed by three of Welltower's existing operating partners. Including this acquisition, Welltower will be the largest owner of senior housing properties in both Southern and Northern California.

The acquisition fits right into Welltower's strategy of acquiring attractive properties in high-barrier markets such as Los Angeles and San Francisco. And, there is significant potential to unlock value in the acquired properties once the transaction begins to close in September. For example, Vintage's Southern California properties currently operate at 82.6% occupancy, well below Welltower's current 94% rate in that area. 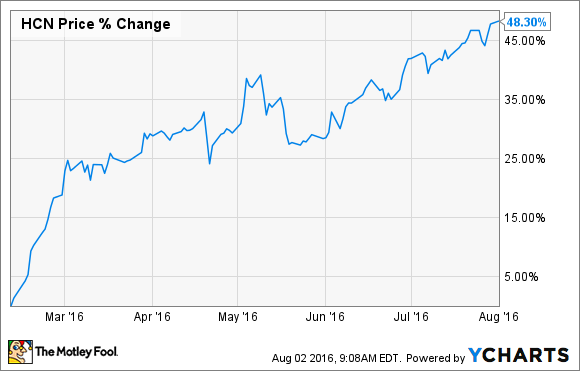 Welltower has gained 48% since its February lows, so it's obviously not as strong of a buying opportunity as it was a few months ago. However, I think the increased price is justified thanks to its 45-year record of strong operating performance, as the persistent low-interest environment, which is a positive catalyst for REITs. Besides, don't forget the reason for the low share price in the first place -- selling pressure created by poor financial results from other healthcare REITs and certain facility operators -- not Welltower. Once the market realized that Welltower was still as solid as ever, the share price rebounded quickly.

At 17.4 times the midpoint of its 2016 FFO guidance, I wouldn't call Welltower expensive just yet. While there's no way to predict whether Welltower will pull back or continue to climb on a short-term basis, at the current price the stock certainly makes sense for dividend seekers who want consistently strong income for years to come as well as the potential for growth.