What: Shares of Hortonworks (NASDAQ:HDP) plunged on Friday following the release of the company's second-quarter report. The software maker missed analyst estimates on all fronts and lowered its guidance for the year, sending the stock down 28% by noon.

So what: Hortonworks reported second-quarter revenue of $43.6 million, up 46% year over year but about $1.6 million shy of the average analyst estimate. Operating billings rose 49% to $62.2 million, while deferred revenue jumped 64% year over year.

In addition to falling short of expectations for the second quarter, Hortonworks lowered its full-year guidance. The company now expects to produce revenue of $177 million, down from previous guidance of $190 million. 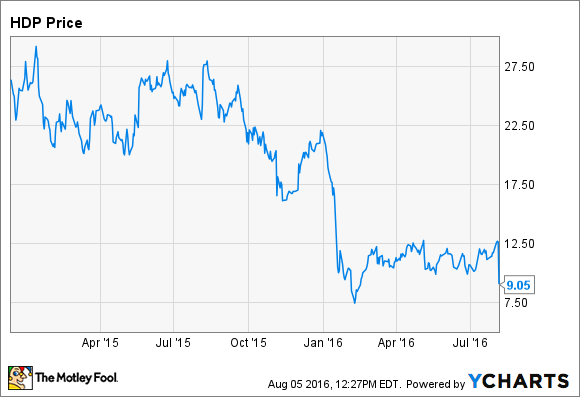 Now what: Shares of Hortonworks are now down nearly 60% year to date following Friday's plunge. The company is still growing fast, but a reduction in guidance wasn't well received by investors. Hortonworks is producing massive losses and burning through cash as it spends heavily on growth.

CEO Rob Bearden pointed to the positives: "Our second-quarter performance was highlighted by strong support subscription revenue growth and a material improvement in operating cash flow. We remain focused on transforming our enterprise customers' business models while also improving our own business model."