Shares of Cloudera (NYSE:CLDR) dipped 22% in October, according to data from S&P Global Market Intelligence . The cloud-software company's stock climbed early in the month following news of its planned merger with Hortonworks (NASDAQ:HDP), but it sold off amid a pronounced contraction for the broader market. 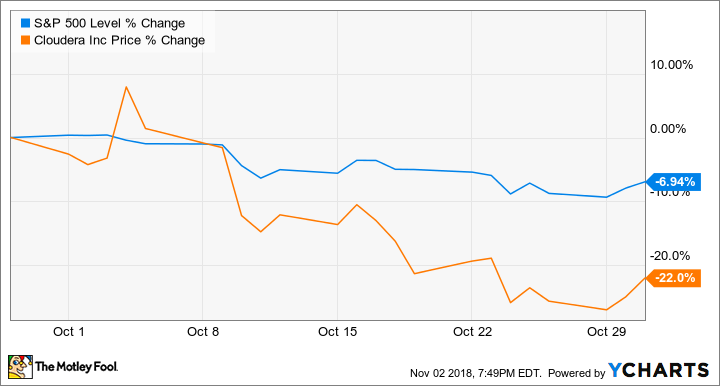 Cloudera is a growth dependent-tech company that's valued at roughly 4.5 times this year's expected sales and has yet to post a profit, and these characteristics prime it to see big stock declines when the market is feeling bearish. However, there otherwise wasn't much in the way of company-specific news contributing to last month's decline. 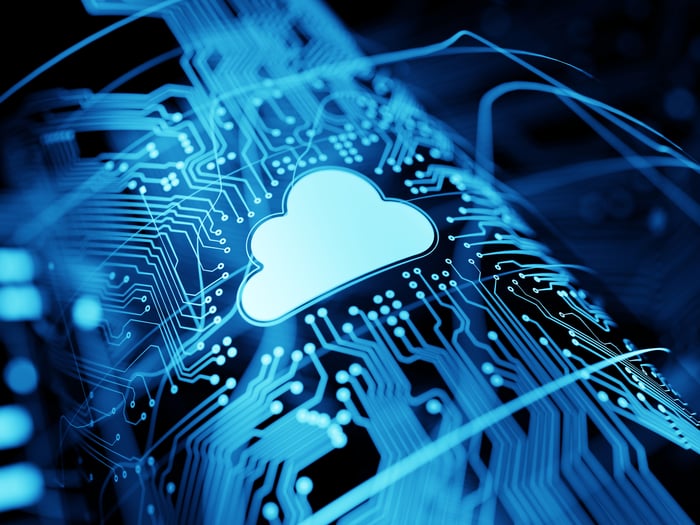 While Cloudera saw big sell-offs with the market last month, the bigger news for long-term shareholders was the company's intention to merge with Hortonworks, a company that's also focused on Hadoop-based cloud data services. The deal was outlined in an Oct. 3 press release, will see Hortonworks shareholders receive 1.3 shares of Cloudera for each share of Hortonworks that they own, and is expected to result in cost savings and more efficient innovation initiatives for the combined business. The merger was approved by each companies' board of directors and is expected to close in the first quarter of 2019, but it still has to be approved by shareholders and undergo regulatory review.

Cloudera stock has continued to sell off in November, trading down roughly 7% in the month so far even as the broader market has seen some recovery. The sell-off appears to be tied to Hortonworks third-quarter release. 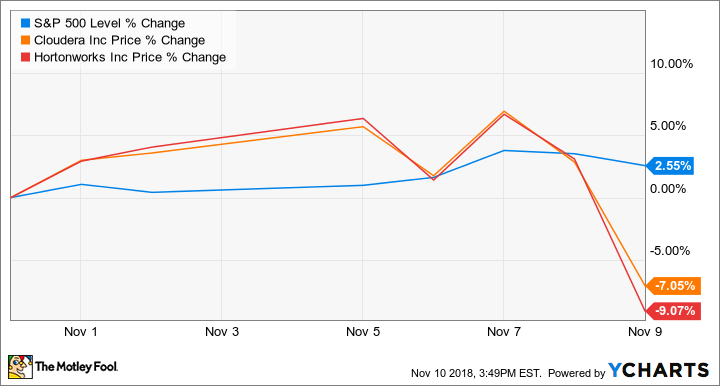 Hortonworks published third-quarter earnings after market close on Nov. 8, with results for the period coming in ahead of the average analyst targets. The average analyst estimate called for sales of $87.07 million, with actual revenue for the period coming in narrowly ahead of that figure at $87.17 million -- representing 24% growth year over year.

The company posted a bigger beat on the earnings side of things, with its net loss per share coming in at $0.06 compared with the average analyst estimate's call for a per-share loss of $0.13. That represented a significant improvement ver the company's per-share loss of $0.24 in the prior-year quarter. However, investors appear to have been expecting more or been deterred by a lack of fourth-quarter guidance, as shares of Hortonworks and Cloudera sold off in tandem following the release.