So what: All three biotechs reported earnings yesterday, but that doesn't seem to be the reason for the double-digit gains. ImmunoGen and Momenta Pharmaceuticals reported before the bell, so the market had all day Thursday to digest the news (and sent both stocks down a little). Momenta actually disclosed a bit of bad news on Thursday morning, noting that it was stopping a trial testing necuparanib because it didn't seem to be helping pancreatic cancer patients.

Alnylam Pharmaceuticals reported after the bell, so this was the first trading day, but without any drugs on the market and no significant news in the press release, it doesn't appear that the earnings release is driving the move.

Instead, the biotechs could be moving because there's been increased mergers and acquisitions activity in the space. This week, The Wall Street Journal, citing unnamed sources, said that Biogen was being looked at by Merck and Allergan.

While Alnylam, ImmunoGen, and Momenta aren't in the same big leagues, they all have interesting pipelines that could complement a larger drugmaker's future growth. And all three are well off their highs from last year. 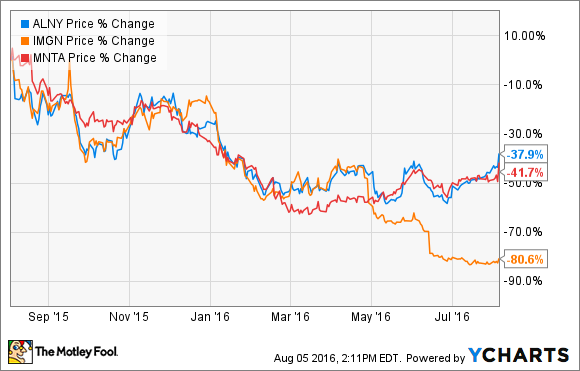 Now what: Buying with the hope of a buyout is never a good investment thesis, but if that's the reason ImmunoGen, Momenta, and Alnylam are moving today, investors should enjoy the ride.