Daniel Miller, John Rosevear, and Neha Chamaria
(TMFTwoCoins)
Author Bio
As a Motley Fool Industrial Specialist, I use my marketing and business background in the automotive industry to evaluate major automakers and other large industrial corporations. Follow me on twitter for tweets about stocks, cars, sports, and anything I find amusing. Follow @DanielMillerTMF

Sure, everybody standing around the watercooler or coffee pot in the break room loves to talk about the exciting small-cap growth stock that could make you rich. But large-cap stocks have a lot to offer when considering the fact that the companies are often well established, experienced, have recognizable brands, typically pay dividends, are relatively safe, and many times own sustainable competitive advantages. Here's a look at three compelling stocks that investors should consider when researching large-cap stocks to buy in August.

Daniel Miller: Skyworks Solutions Inc. (NASDAQ:SWKS) remains on the very top of my list of large-caps I'd like to start a position in, and it just became even more attractive last week -- more on that in a second. Skyworks is a manufacturer of high-performance analog semiconductor chips that help connect people and their devices, spanning a number of end-markets.

Some trends are hard to predict, but mobile data usage and the number of connected devices seem like sure bets to continue soaring higher in our increasingly digital world. It's really as simple as Skyworks says on its website: "If you believe that connectivity is the future, then investors should start here." If you're like me and need a visual, here's a look from Skyworks' investor presentation. 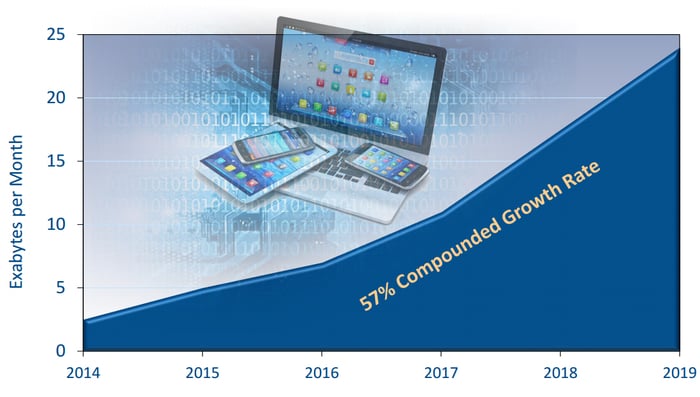 Moreover, beyond the growth in the number of devices and data usage, these devices are going to become increasingly complex in the years ahead, which should open up plenty of opportunity for Skyworks, whether it be in the Internet of Things, automotive, wearables, tablets/smartphones, or others.

While Skyworks has a wide range of catalysts, one that I often refer to is the expansion of 4G LTE networks. In fact, the 4G smartphone adoption is still in the early innings globally, and these smartphones use a broader variety of wireless spectrum and frequency bands, which require higher value chips. That's good news for Skyworks as a leading supplier of radio frequency chips.

Skyworks is high on my list, but as always, there are risks. Not only is it a competitive landscape, but if Apple were to switch vendors in the future, it would be a significant blow to the investment thesis. That's also why there's a current opportunity to pick up shares of Skyworks on the cheap, after Apple's year-over-year decline in iPhone sales weighed on Skyworks' top line in the most recent quarter.

That's a short-term problem, though, and as the world becomes increasingly connected and our devices more complex, Skyworks should have plenty of growth in store for a large cap.

2. Who says investing in railroads is boring?

Neha Chamaria: Railroads may not be a fancy high-flying industry, but the economy could come to a standstill if rail stopped transporting goods. That stability in business makes railroads a compelling investment choice, which is why Canadian National Railway Company (NYSE:CNI) is my top large-cap stock pick today. What really caught my attention as of late with this stock was the railroad giant's recently reported quarterly numbers.

First, the bad news: Canadian National's revenue dropped 9% year over year during the second quarter. However, low oil and commodity prices have hurt shipments across the board. Now, for the good news: The railroad's net income declined only 3% during the quarter, while its operating margin climbed 2 percentage points and 4 percentage points year over year and sequentially, respectively, to 45%. The company hopes to end 2016 with flat EPS at worst, despite deteriorating business conditions. That's great, isn't it? Wait, you still haven't heard the best news: Canadian National's operating ratio.

Operating ratio -- or operating expenses as a percentage of revenue -- is a vital measure of efficiency for railroads. Canadian National is perhaps the best in class out there, with its operating ratio hitting a quarterly record low of 54.5% in Q2. Let's quickly compare that with two peers: Union Pacific's Q2 operating ratio was up 1 percentage point to 65.2%, while CSX's rose 2 percentage points to 68.9% in its second quarter. The numbers speak for themselves.

If you're worried about the stock's recent rally, know that Canadian National is trading close to its five-year trailing P/E, though its margins, operating ratio, and overall prospects are looking better than ever. I'd consider that a great bargain today.

John Rosevear: I've been saying for a while that General Motors (NYSE:GM) is doing great things that deserve more attention from investors. As we swing into August, with GM trading at just 4 times its trailing-12-month earnings, I'm stepping it up:

Folks, GM is a buy in a big way right now.

Listen, I know that people are worried that the U.S. new-car market is probably peaking and that GM's profits will get squeezed when we eventually slide into the next recession. There's no doubt that's true, and those worries are probably a big part of why GM shares are so cheap.

But here's the thing: Right now, GM is better prepared for a recession than it ever has been. And it'll come out of that recession (whenever it happens) as a high-tech powerhouse that is set to lead the coming high-tech disruption of the auto industry, rather than fall victim to it.

GM will beat Tesla Motors to market with an affordable 200-mile electric car by at least a year. While Alphabet is playing with cute self-driving "panda cars," GM is months away from rolling out a self-driving taxi pilot program with Lyft.

Yes, for real. Believe it or not, the self-driving future will arrive in a Chevrolet -- soon. (An electric Chevrolet, no less!)

Did I mention that GM owns a big stake in Lyft, that GM president Dan Ammann sits on Lyft's board, and that GM is already using its relationship with Lyft to introduce its best new products to young urban folks?

But the case for GM isn't just about the tech. Under its extremely sharp CEO, Mary Barra, GM has boosted the quality of its current models to match the best from Japan. GM's vehicles are better than ever. Its trucks and SUVs get much better fuel economy than the models from the bad old days -- and they're selling so well that many GM factories are maxed out right now.

They're selling at good prices, too: GM just posted a record profit, with a 9.3% pre-tax profit margin. That's a huge margin for a mass-market automaker -- and Barra is driving changes that will make that kind of margin the standard for GM, quarter after quarter.

Long story short: GM is financially very strong, on track for significant growth, set to be a leader of the coming high-tech auto revolution -- and trading at just 4 times earnings.

Did I mention the 4.8% dividend yield? Or that GM's CFO thinks the dividend is sustainable through even a moderate recession? Or that GM's management team is remarkably focused on delivering sustained value to its shareholders?

Yeah. Take a closer look at this one.