Please ensure Javascript is enabled for purposes of website accessibility
Log In Help Join The Motley Fool
Free Article Join Over 1 Million Premium Members And Get More In-Depth Stock Guidance and Research
By Reuben Gregg Brewer - Updated Aug 22, 2019 at 11:36AM

Nucor's strong financial results show up in its history of top-notch margins, which flow directly to the bottom line -- and your pocketbook.

Nucor Corporation (NUE 4.73%) is a leading U.S. steel maker. That's been a tough business to love since the 2007 to 2009 recession, with red ink flowing liberally at some of the largest industry players, like AK Steel (AKS) and United States Steel (X 4.37%). The standout performer appears to be Nucor, and its consistent place at the top of the margin pile shows why. 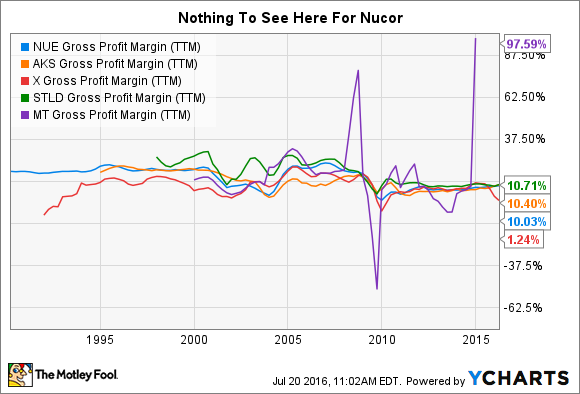 Not too different up here

One of the first things to notice about Nucor's margins is that at the very top, gross margin is decidedly normal over time. That suggests input costs for Nucor aren't all that much different from those of its peers, which makes complete sense since the primary costs for making steel are commodities like iron ore, scrap metal, and energy. Nucor does a good job of trying to control these costs; for example, it's one of the largest metal recyclers in the country, but commodity prices are largely out of its control. 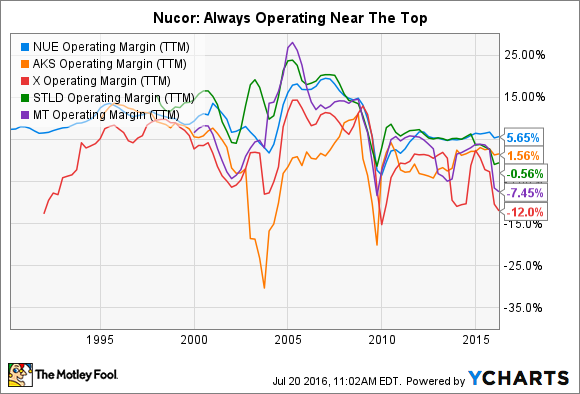 So, Nucor doesn't stand out on the gross margin front. Where it begins to shine is with operating margins, where the company trends at the top of the industry. That said, Nucor tends to be fairly conservative with regard to debt, with long-term debt making up around a third of the capital structure at the end of the first quarter. U.S. Steel's long-term debt made up just over 60% of its capital structure. AK Steel, meanwhile, has had so many non-cash write-offs that shareholder equity is negative -- which pushes debt over 100% of the capital structure. So it's possible interest expenses are weighing on Nucor's competitors.

Pulling out interest (and taxes) by using EBIT margin only makes Nucor look better. What gives? A big piece of what helps Nucor stand out is its unique profit-sharing method. When the company does well, its employees see the benefit, on a weekly basis, in their paychecks via a profit-sharing payment. When the company isn't doing as well, like recently, those extra payments go away. That helps keep costs in check at the exact moment it's most needed, which helps explain why Nucor's margins have held up well while peers have seen their margins fall dramatically.

Go another step and pull out depreciation and amortization, and Nucor looks even better. Owning and operating steel mills is a capital-intensive business, so non-cash depreciation and amortization costs could cloud a company's true profitability. Maybe Nucor's competitors would look better using EBITDA margin, but the key takeaway is that, once again, Nucor regularly sits among the industry leaders. 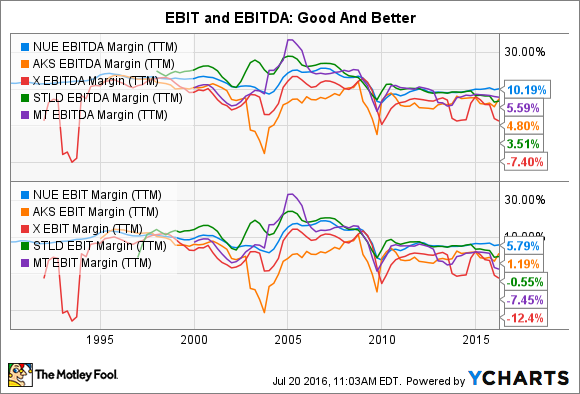 In fact, 2015 was something of a standout year for Nucor. It was at the top of the heap on operating margin, EBIT margin, and EBITDA margin. It's no wonder Nucor was able to remain in the black in 2015 while peers AK Steel, U.S. Steel, and ArcelorMittal (MT 2.62%) bled red ink. Even Steel Dynamics (STLD 4.41%), which has business operations very similar to Nucor's, couldn't avoid losing money last year.

Why is this so important

Clearly, a company that can make money while others can't is an industry leader. But there's more to it than that, because Nucor's strength lets it reward its shareholders. Specifically, the company's dividend has been increased for an incredible 43 years. While recent dividend growth has been pretty anemic, that's to be expected through an industry downturn. At the end of the day, though, Nucor's ability to lead through thick and thin on the margin front translates to better bottom-line results and consistent rewards for its investors. It's hard to argue with that.