What: Despite a lot of volatility, crude oil prices ended the week virtually flat at around $42 a barrel. That lackluster week for crude did not mean that the oil market was quiet. Instead, earnings were the big story this week, providing all the fuel oil stocks needed to move sharply. 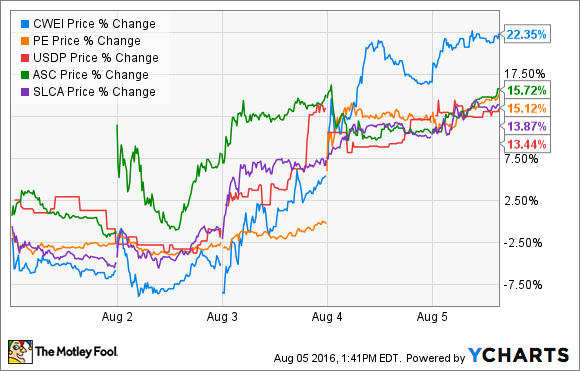 So what: Texas-focused driller Clayton Williams Energy soared after it reported second-quarter results. While the company reported a steep loss of $2.83 per share, which was $0.42 per share more than the consensus estimate, investors focused their attention on its strong drilling results. Further, the company believes it's now in a turnaround period after making moves to strengthen its balance sheet. It's a turnaround that analysts at Wunderlich are starting to buy into, as it upgraded Clayton Williams from a sell to a hold, and boosted the price target from $15 up to $35.

Fellow Texas driller Parsley Energy, on the other hand, soared after reporting a surprising profit. Analysts thought the company would lose $0.01 per share; however, it reported an adjusted profit of $0.04 per share. Fueling that surprise gain was a 23% surge in production over last quarter along with significant declines in costs. Because of its strong showing, the company boosted its capex budget and its production guidance.

Midstream MLP USD Partners reported a solid quarter, with distributable cash flow surging 44.7% year over year, to $12.6 million, due to the recent acquisition of the Casper terminal. USD Partners also announced its fifth-consecutive distribution increase, supported by the steady rise of its fee-based cash flow. Even with its latest increase, the company's coverage ratio remains a very robust 1.7 times, giving investors growing confidence that the payout will make it through the industry's current downturn.

Petroleum-product tanker company Ardmore Shipping, on the other hand, reduced its dividend this week by 31% as a result of a decline in earnings. It did report earnings of $0.20 per share, which beat the consensus estimate by $0.06 per share, though it was below the $0.30 per share it earned in the year-ago period. The company anticipates that earnings will rise in the future after it closes its recently announced acquisition of six product tankers, which are expected to boost its revenue days by 23% in the fourth quarter, and by another 15% in 2017.

Finally, frack-sand producer U.S. Silica beat analysts' expectations, with its $0.17 per-share loss coming in $0.05 per share ahead of the consensus estimate. While the energy sector's troubles hampered its oil and gas business, its industrial businesses had one of its best quarters in the company's 116-year history. Meanwhile, the company is taking advantage of the oil-market downturn to boost its market share by acquiring a Texas-based frack-sand producer in a deal it expects will be accretive to earnings.

Now what: While times are very tough in the energy sector, companies are doing what they can to make the best of it. For producers, that means cutting costs to capture as much cash flow per barrel as possible, while service providers are hunting for value-creating acquisitions. These moves should not only bolster results during the downturn, but drive results much higher when conditions improve.