On the list of reasons a company sees a stock spike, "bought its only major competitor" tends to be a very strong one.

That's what happened in late July when LogMeIn (NASDAQ:LOGM) agreed to buy Citrix Systems' (NASDAQ:CTXS) GoTo business. The deal combines the leading two players in the virtual meeting facilitation space, creating a company expected to have $1 billion in revenue at a 35% profit margin, according to a press release announcing the deal. 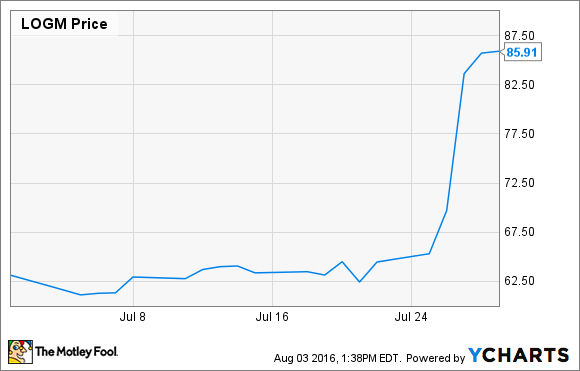 What: LogMein stock opened July at $63.32 before spiking after the purchase was announced. Shares closed the month at $83.93, a 32% increase, according to data provided by S&P Global Market Intelligence. The entire jump, as you can see on the chart above, happened after the deal was announced.

So what: LogMeIn has taken its major competitor off the board which not only gives it a bigger business, it allows the company to operate more efficiently. In a press release LogMeIn said that the $1.8 billion transaction will give it run-rate cost synergies of $65 million in the first year after the merger and more than $100 million in year two.

Bill Wagner, LogMeIn's CEO who will lead the combined company, lauded the merger and the benefits it will bring to shareholders in his comments in the press release.

Both companies have passionate employees who are committed to developing easy-to-use software that simplifies the way we connect with people, devices, apps and products. The additional scale of the combined company will allow us to accelerate innovation in order to deliver better outcomes for our customers and also creates a compelling financial model that will reward our shareholders.

Now what: This is a very smart deal by LogMeIn, but as is the case with any merger, whether it works out comes down to execution. In some cases bringing two rivals together can lead to short-term headaches where the expected efficiency gains are not as easy to obtain as planned.

It's hard to think this deal won't work out in the long run as these two companies control nearly the entire space The bigger question is whether it works quickly or will it take a few quarters after the deal consummates to bring the two company cultures together.