Though the report contained some bright spots, Stratasys continues to face the widespread slowdown in demand for enterprise 3D printers that began in early 2015 and has also affected its rival, 3D Systems (NYSE:DDD). To provide color to the earnings results (you can read my take on them here), the following are four things you should know from Stratasys' analyst conference call. (Transcript via Thomson Reuters.)

For the [product distribution] channels ... we do have exclusivity globally. We do not see yet significant impact of HP activity in the market.

We do have channels that are working with us for 20 years. ... I think that our product offering[s] [around FDM and PolyJet are] attractive or very attractive to the channel compared to other alternatives in the market today.

Simha went on to say that the company hasn't seen any of its distribution partners leaving so they can work with HP. His remarks were in response to Piper Jaffray analyst Troy Jensen's question asking if the company had exclusivity agreements in place with its product resellers. Jensen said his firm had talked to "a lot" of Stratasys' channel partners, noting there was "a lot of interest" among them in HP Inc.'s (NYSE:HPQ) 3D printer, and that "several" of these resellers are "contemplating partnering with HP."

I'd not give too much weight to Simha's comment that Stratasys hasn't had any of its resellers jump ship so they can partner with HP. It's too early for resellers that are doing a solid amount of business with Stratasys to leave it for HP. HP just launched its 3D printer in May and it won't be available until the fall.

Moreover, there's been some chatter that Stratasys' exclusivity agreements might not hold up. However, this is only hearsay at this point, so don't give it much credence.

Our guidance for 2016 remains as follows: total revenue in the range of $700 million to $730 million. ... Based on revenue trends in the first half of the year, we now believe that we will end 2016 at the low end of our revenue guidance.

Glenn reiterated the 2016 guidance the company established when it released Q4 2015 results in early March. I only included in the quote the revenue part, as that's the only part the company said it now expects to come in at the low end of the range.

Some might consider this a guidance cut without the company formally calling it that. Companies hate to lower guidance because the market will often sell off their stocks. However, it's often the right thing to do as early on as possible, because the market can be more unforgiving if it later turns out that guidance should have been ratcheted down earlier in a fiscal year. Let's hope that Stratasys ends the year with at least $700 million in revenue, so it can avoid the market's wrath.

Stratasys could have avoided this scenario by not issuing full-year 2016 guidance at all -- the tack 3D Systems took -- or at least not as early as it did so. It seemed premature for it to issue 2016 guidance at the usual time in light of what it and 3D Systems were characterizing as a lack of visibility into market conditions.

The J750 launch was very successful -- and helped increase margins

There was much talk on the call about the J750, which launched in early April. Initial sales of this 3D printer exceeded Stratasys' expectations and was one of the two primary drivers -- along with cost-cutting -- of the increase in gross margin from the year-ago period. 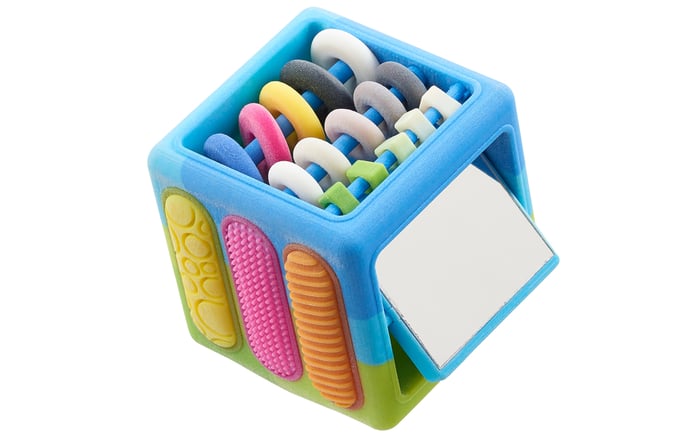 This toy was printed in one piece on the J750 and required no painting or assembly, except the addition of a mirror. Image source: Stratasys.

The J750 is the world's first full-color, multimaterial 3D printer, and can automatically map more than 360,000 colors from design software or photorealistic models and load six materials at once without swapping canisters. The printer, which is aimed at improving the new product design process, is an addition to Stratasys' Objet line.

Management said early sales of the J750 were to customers in the consumer products, medical device, and education industries, and to service bureaus.

Within service revenue, customer support revenue during the quarter, which includes the revenue generated mainly by maintenance contract[s] on our systems, increased by 11% compared to the same period last year, driven primarily by growth in our install[ed] base of systems.

Simha's comments address how the company's razor-and-blade-like business model -- 3D printers are the "razors" and consumables and service contracts are the "blades" -- continues to generate recurring revenue from the growing installed base, even during a slowdown of 3D printer sales. Consumables at least tend to have higher profit margins than the company average, which can make razor-and-blade business models quite lucrative when they're working successfully.