Shares of online marketplace Etsy (NASDAQ:ETSY) have surged over 40% in the past few days, after a Wall Street analyst initiated a buy rating and last quarter's earnings were released. Should investors pile in? Or is there more to the story? 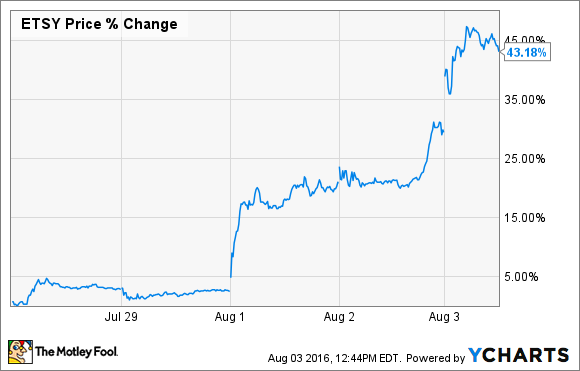 The story of Etsy's stock

Since going public in early 2015, shares of the homemade-goods seller have been in decline. After becoming a publicly owned company, shares began trading at $30 only to quickly collapse to half that amount over its first few months. The stock resumed its slide, eventually bottoming out at $6 in February this year.

Etsy has since begun to recover, but the recent climb took on a dramatic tone since an analyst at Citigroup (NYSE:C) initiated coverage with a buy and price target of $14 per share. In the days that have ensued, shares rose over 40% and are now north of the $14 price target placed on them. 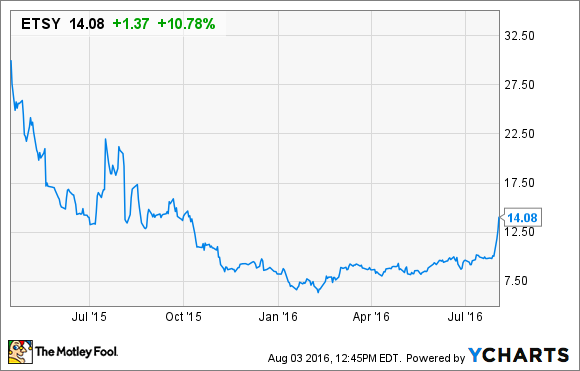 The buy report cited Etsy's success in building a niche marketplace that sets it apart from close competitors Amazon.com (NASDAQ:AMZN) and eBay (NASDAQ:EBAY). The company released its last quarterly results on Aug. 2, confirming the bullish analyst remarks, but investors should be wary.

The story of Etsy's business

Etsy is an online marketplace that enables small makers of craft goods and specialty items connect with sellers. Etsy directly competes with and offers a similar service as Amazon and eBay, despite having carved out a piece of the market that caters to a more eclectic crowd. While the company has made headway in the past year adding sellers and buyers both in the U.S. and abroad, its stiff competition from the well-established e-commerce giants alone is enough to make me shy away from a purchase.

In its last quarter, Etsy's revenue increased 39%, and the loss per share narrowed to $0.06 from $0.07 last year. Cost of revenue and operating expenses as a percentage of revenue decreased to 34.1% and 60.5%, respectively, down from 35.7% and 70.4% last year. The company's successful efforts to add sellers and buyers to its platform are helping improve margins.

However, these numbers should be taken in the context of the company's three-year outlook through 2018. While revenue is expected to keep growing 20% to 25% a year, the company's internal margin measurements aren't expected to improve much. That leaves me with doubts as to the long-term profitability of the business.

Though there have been improvements, the company has swung to free cash flow-negative in the past year as it attempts to grow. Free cash flow represents what's left after a company maintains and expands operations. After briefly swinging positive early this year, cash flow has swung negative very quickly through the last quarter. 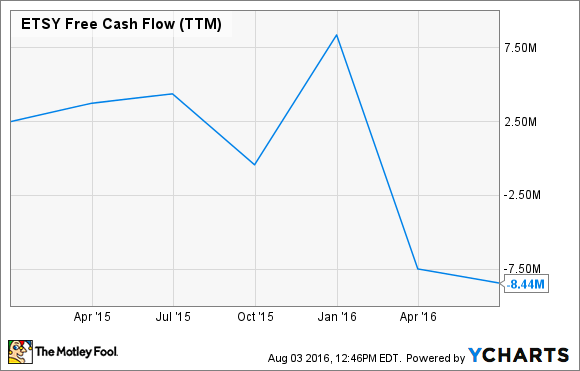 I do believe Etsy will fill a niche role in the e-commerce industry, both here in the U.S. and internationally. The thin margins and high cost to expand in a world that has already embraced the similar services of Amazon, eBay, and other online-only stores, however, leaves me feeling underwhelmed.

The final piece of context to consider here is that shares have rocketed so high in a matter of days. In fact, the stock has risen beyond the price target placed on it that initiated the rise in the first place. Investors have little to gain by chasing the stock at this point.

The consensus analyst estimate is that company profit will grow 10% a year in the next five. This compares with 50% for Amazon and 5% for eBay. Forward price to earnings for Etsy is at 236, compared with 72.9 for Amazon and 14.8 for eBay. There is a lot of risk in buying Etsy at current valuations. Investors looking to buy an online retail company could do better elsewhere.

Etsy provides a great service and platform for aspiring entrepreneurs to sell their wares. The company has also demonstrated its ability to grow its user base and revenue. That said, investors should ignore the stock after its big week, as positive improvements are now more than priced in.