Crop nutrient producers are united in their sunny predictions, but that doesn't mean there aren't storm clouds on the horizon. 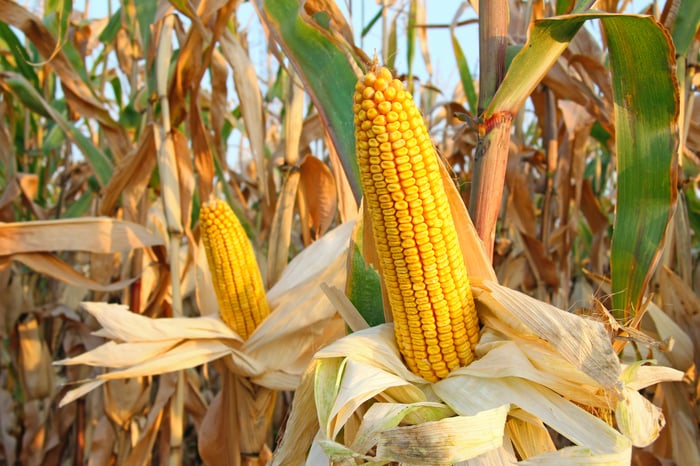 Despite all three major North American fertilizer producers agreeing that the potash market has hit bottom, you still shouldn't believe them. The market remains in oversupply, producers are still producing more than they sell, and PotashCorp's (POT) big dividend cut indicates that it is hedging its bets.

PotashCorp got the ball rolling by reporting second-quarter results that, although they met analysts' expectations for profits, missed on revenues, and the company was forced once again to lower its outlook for the year. That amounts to the fifth time in the past six quarters PotashCorp had to reduce its guidance -- hardly a track record to engender confidence that the market was about to make a U-turn.

Yet Mosaic (MOS -0.14%) followed PotashCorp with its own dismal results as sales tumbled 32%, while a year-ago profit of $391 million became a $10 million net loss this time around. Surprisingly, Mosaic, too, said happy days would soon be here again and saw "signs of stabilization in the second half of the year."

Not to be outdone, Agrium (NYSE: AGU) joined the parade, jumping on the bandwagon with lower profits and a reduced full-year outlook. And like PotashCorp and Mosaic before it, the crop nutrient producer also had reasons for hope:

China's slow boat to sail on by

Earlier in the year, PotashCorp had pointed at historical trends indicating 2017 would be a better year. It noted that in years following delays in China's signing contracts (or not signing one at all), higher demand invariably followed.

That may be true, but just as in investing, past performance is not a guarantee of future results. Analysts at Credit Suisse say the chances of a potash rebound as predicted by the three major producers are little more than wishful thinking, and that higher prices "will elude us for years, not quarters."

Financial analysts anticipate potash prices of $200 per tonne next year and $190 per tonne the year after, and that's after India signed a contract for this year at $227 per tonne, and China followed with one for $219 per tonne. However, Credit Suisse had expected the latter to sign a contract for no more than $210 per tonne.

Complaining about the weather

Some of the upbeat outlooks were predicated on currencies in Latin America stabilizing and the global La Nina weather pattern positively impacting crop plantings here at home. The analysts say that while currencies in Brazil and elsewhere may have stabilized, credit remains an issue there, as does demand.

Similarly, La Nina hasn't materialized, and U.S. farmers are inundated with a bumper crop. The Financial Times reports wheat, corn, and soybean crops have come in at overflowing rates, with farmers anecdotally reporting unprecedented harvests. As a result, crop future prices are plunging as even other markets such as Russia, the Ukraine, and Europe all report better outlooks.

While PotashCorp is putting on a brave front, it's also preparing for an extended downturn -- otherwise why slash its dividend 60%, having already cut it once before this year? CEO Jochen Tilk admitted as much, noting on the call with analysts that "despite recent evidence that prices have stabilized, we intend to take the prudent approach to protect our balance sheet."

It's quite possible that future potash pricing might not remain near their lows for the rest of the year, but there remains enough doubt and macroeconomic headwinds that investors might want to be circumspect about the feel-good attitude being expressed by these potash producers before planting a stake in their stocks.