What: Shares of Brazilian airplane manufacturer Embraer ( ERJ 2.04% ) plunged 15.9% last month according to data from S&P Global Market Intelligence. This continues a brutal descent that began about two years ago. The stock has lost more than half of its value during that period. 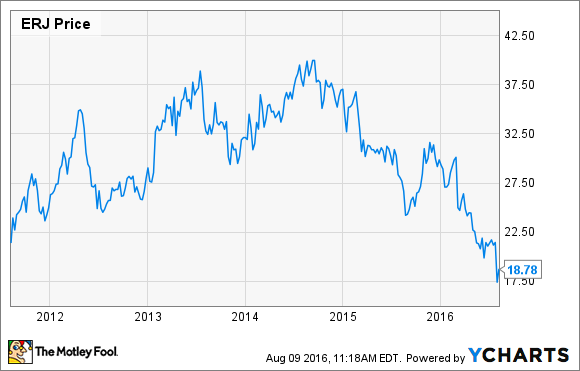 So what: Nearly all of Embraer stock's losses in July came on the final trading day of the month, when the company released a disappointing Q2 earnings report. The company reported a net loss of nearly $100 million, driven by a weak market for executive jets and a $200 million loss contingency relating to a long-running corruption investigation.

Embraer also reduced its revenue and margin guidance for the full year -- even excluding the $200 million charge -- again driven by lower revenue and a lower profit margin in the executive jets segment.

From a cash flow perspective, Embraer has even bigger problems. The company now expects to end the year with a surplus of inventory for its executive jets segment. As a result, free cash flow could be as low as -$400 million for the full year.

Now what: The good news for Embraer is that its commercial aviation segment continues to perform well. This business segment, which accounts for nearly 60% of the company's revenue, consistently generates double-digit margins. Embraer expects to deliver 105-110 commercial jets this year, up from 101 in 2015.

With a new, more fuel-efficient version of Embraer's commercial jet lineup slated to enter service in early 2018, the commercial aviation business is likely to see further revenue and profit growth in the years ahead.

Meanwhile, Embraer's KC-390 small cargo/tanker plane should be ready around the same time. The KC-390 has huge sales potential beyond Embraer's home market of Brazil and could help the company revive a defense business that has struggled lately, while driving substantial revenue growth.

Thus, at least two of Embraer's three business segments are well-positioned for revenue and profit growth over the next several years. If the company can get the executive jet business back on track during that timeframe, Embraer stock should be able to bounce back.