Both Sibanye Gold Limited (NYSE:SBSW) and Coeur Mining, Inc.'s (NYSE:CDE) led the precious metals mining industry in July with share price gains of 37% and 44%, respectively,. What drove those big gains? Investors' expectations of good news -- which they pretty much got from this pair and more.

Hints of the future

July was an OK month for gold and silver prices, with both up around 4% or so. Those relatively modest gains in precious-metals prices, however, don't exactly go hand in hand with Sibanye and Coeur's stock price advances. In fact, even the gains from AngloGold Ashanti Ltd. (NYSE:AU), Royal Gold, Inc. (NASDAQ:RGLD), and Silver Wheaton Corp. (NYSE:WPM), which were a step down from that pair at 21%, 18%, and 17%, respectively, seem out of line with the roughly 4% gain in silver and gold prices.

So why did these precious-metals stocks, and many others, head so much higher in July? The answer is largely about investor expectations for a good batch of quarterly results.

For example, in early July, Royal Gold announced that the average prices it received for its precious metals had gone up roughly 7.5% in the June quarter, compared to the previous quarter. Although the amount of gold and silver the company sold was, as it expected, relatively flat with the prior quarter, revenue and adjusted EBITDA (earnings before interest, taxes, depreciation, and amortization) were up 26% and 20%, respectively, in the March quarter. So the July update hinted that, when Royal Gold reported June quarter earnings in early August, it would be a nice read and a good way to close out the company's fiscal year. Silver Wheaton, a similarly focused precious-metals streaming company, didn't provide any updates, but went up along with Royal Gold.

Sibanye and AngloGold Ashanti, two companies that get their hands dirty mining for precious metals, also put out announcements suggesting that second-quarter earnings would be solid. AngloGold provided an update on its second-quarter earnings on July 22. According to the company, earnings would be between 131% and 141% higher than in the same period in 2015. Adjusted earnings, meanwhile, were expected to be up between 167% and 177%. Those are some pretty big numbers, proving that investors' expectations for good results would be met.

A few days later, on July 27, Sibanye announced that gold prices were, on average, 30% higher year over year in the quarter. More important, that was set to drive the miner's earnings between 70% and 110% higher than in the year-ago period. Like AngloGold, Sibanye noted that adjusted earnings would be even better than basic earnings, too. So, overall, investor excitement for precious-metals shares in July was clearly being backed by company news, even though these companies hadn't yet reported results.

But it wasn't just hints at the future that led the way. Coeur reported earnings late in July, and the numbers were really good.

For example, Coeur produced 19% more silver and gold than it did in the first quarter, and sold 12% more, sequentially, too. It's always nice to see a miner expand output. But the big number was on the bottom line, where Coeur had net income of $0.09 a share, up from a net loss of $0.12 per share in the period a year earlier. The really exciting news for Coeur, which has relatively high operating costs, was that in the second quarter the company was in positive territory (the miner had been bleeding red ink for quite some time). Put a different way, if precious-metals prices hold at these levels, which is far from certain, Coeur's mining business can turn a profit. 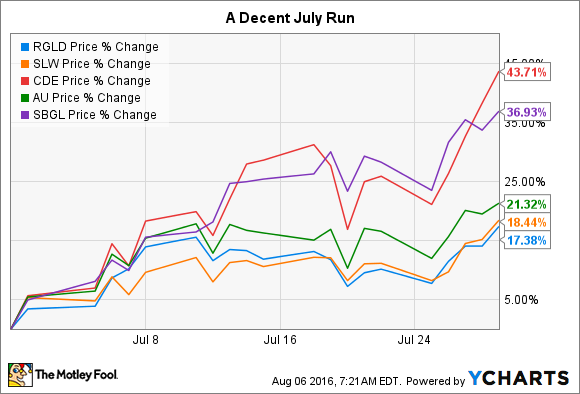 Although there wasn't all that much hard evidence of improving results in July from this group, since only Coeur reported earnings, a host of precious-metals companies gave hints that backed up investor expectations. Essentially, the gold and silver rallies that have taken place in 2016 are, indeed, flowing through to miners' top and bottom lines -- and often in a pretty big way.

While gold and silver didn't exactly light the world on fire in July, the fact that they continued to move higher was more than enough to support the ebullient mood of precious-metals investors when paired with the pre-announcements noted above -- and some actual results. Since gold and silver prices tend to be volatile, there's no guarantee that this good mood will last, but if the precious-metals rally doesn't fade away, investors are likely to remain positive about companies like Silver Wheaton, Royal Gold, AngloGold, Coeur, and Sibanye.