Please ensure Javascript is enabled for purposes of website accessibility
Log In Help Join The Motley Fool
Free Article Join Over 1 Million Premium Members And Get More In-Depth Stock Guidance and Research
By Reuben Gregg Brewer - Aug 9, 2016 at 10:10AM

The steel industry has been a tough market for a while, but July was a good month with a tap-on effect for these key industry suppliers.

United States Steel (X -1.90%) rose more than 60% in July because of an improving industry outlook. However, there's a host of key suppliers to the industry that are poised to benefit along with the steelmakers, like iron ore supplier Cliffs Natural Resources Inc. (CLF 0.93%) and metallurgical coal miner Teck Resources Limited (TECK 0.32%).

What's going on in steel?

The big news out of the steel industry is basically that things are starting to get better. Prices are improving, and foreign imports into the U.S. market are slowing now that protective tariffs have been put in place. That's been huge for U.S. Steel.

Although the steel mill lost $0.32 a share in the second quarter, that was a vast improvement over the $1.79 a share loss in the year-ago period and the $2.32 loss it inked in the first quarter. But it was the future that got investors excited enough to push the shares up more than 60% in a single month. On that score, U.S. Steel said it expects net earnings of $0.34 a share for 2016, assuming the current industry conditions hold. Any further improvement would likely mean more upside. The positive industry outlook was basically echoed at AK Steel, Steel Dynamics, Nucor, and ArcelorMittal. 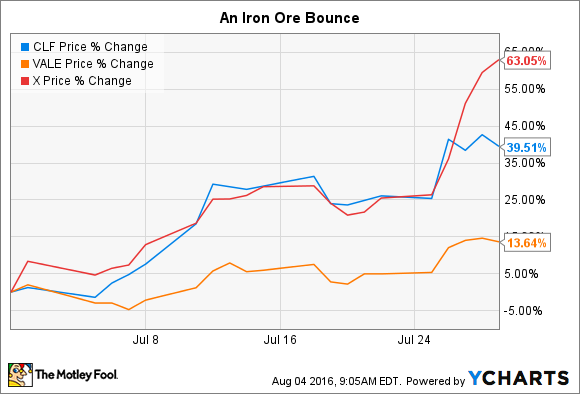 That's good news for iron ore miners like Cliffs and Vale SA (VALE 3.08%), which were up 39% and 13%, respectively. Results from both companies back up the stock gains. For example, on June 9, Cliffs announced that it was upping its full-year production and sales guidance, setting the tone for earnings. It's worth noting that steelmaker Nucor upped its second-quarter earnings guidance shortly after, painting an even brighter picture for the steel and steel supplier industries. So it probably wasn't too big a surprise when Cliffs reported second-quarter earnings on July 28 that were a notable improvement over the first quarter.

For example, Cliffs' sales volume was down 2% year over year in the second quarter. But that was a huge improvement over the 35% year-over-year decline in the first quarter. So it looks like things are getting better, particularly if you pair this news with the positive results out of the steel mills. Moreover, Cliffs inked deals to supply ArcelorMittal and U.S. Steel Canada with iron ore, which should help to solidify future results. Cliffs also penned an energy supply deal that should help keep its costs in check. Was it an amazing quarter? No, but the trend seems to be going in the right direction.

Vale's earnings results, also released on the 28th, showed a similarly positive trend. The Brazilian miner's top line increased roughly 16% compared to the first quarter, largely because it sold more iron ore, and -- equally important -- it was able to charge more for the iron ore it sold. That said, it's important to note that Vale is still dealing with the fallout from the failure of a mine waste storage site at a mine it co-owns with BHP Billiton. Although it has come to an agreement with Brazil over clean-up costs, there's still more litigation pending that could up the final cost materially. It also has a hefty debt load it's trying to manage. So Vale's business may be looking up in some ways, but there are other risks to keep in mind here. 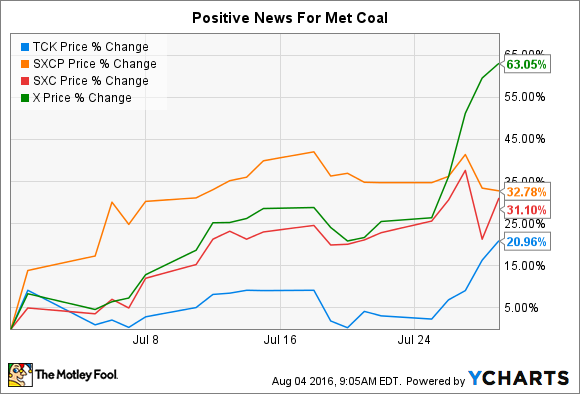 Met coal only makes up around a third of Teck's business. The rest comes from copper and zinc, but coal has been a major drag for several years as the steel industry has been retrenching. So it's little surprise that Teck's shares would start to rebound along with steel. And while the second-quarter results, released on the 28th, weren't great, the improving outlook for coal was highlighted by Teck's realized prices for the steelmaking input, which increased 10% over the first quarter. The company also increased its coal production guidance for the year, further hinting at a brighter future ahead for this key steel input.

If you are looking at Teck, Cliffs, or any of their peers, you'll want to keep a close eye on what's happening in the steel industry. Right now the future is starting to look a lot brighter than it has for some time. And that has obviously got investors excited. It's unlikely that you'll see a long string of big monthly gains like the one in July, but the underlying trends are starting to look better -- and that could mean that now is a good time to do a deep dive in the met coal and iron ore spaces.