What: Shares of online furniture retailer Wayfair (NYSE:W) tumbled on Tuesday following the release of the company's second-quarter report. Results were mixed relative to analyst expectations, with rapidly growing costs leading the company to post a wider loss compared to the same period last year. At 12:15 p.m. ET, the stock was down about 18%.

So what: Wayfair reported second-quarter revenue of $786.9 million, up 60% year over year and about $4.5 million higher than the average analyst estimate. Direct retail revenue, which accounts for nearly all of the company's total revenue, grew 71.6% to $755.7 million. Total active customers increased by 65% year over year to 6.7 million, while net revenue per active customer rose 13.2% to $404. 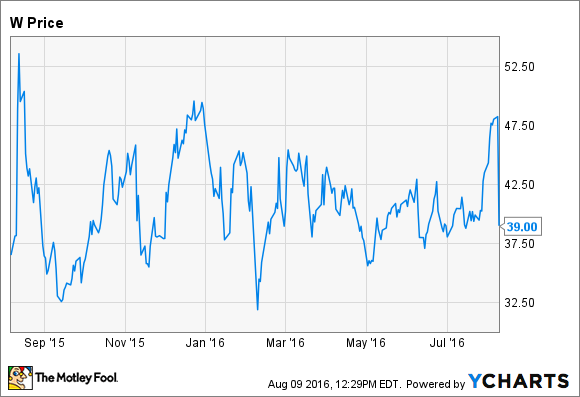 Now what: The slump in Wayfair's stock price on Tuesday puts the stock right back where it was prior to a pre-earnings run. While Wayfair continues to grow revenue at a brisk pace, profitability is getting worse, no doubt raising questions about the company's strategy of heavy spending. Wayfair will eventually need to prove to investors that scale will lead to improved profitability metrics -- something that did not happen during the second quarter.