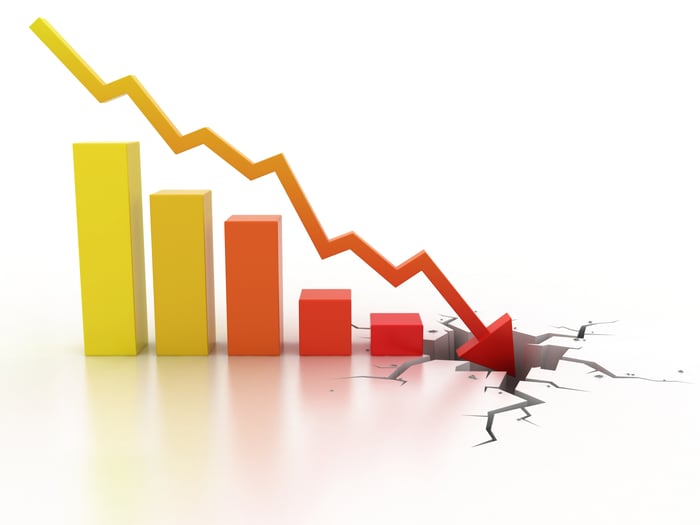 What: Shares of Spectrum Pharmaceuticals (NASDAQ:SPPI), a small-cap biotech focused on Hematology and Oncology, are down more than 14% as of 12:00 p.m. EDT after the company reported its second-quarter earnings.

So what: Total sales in the second quarter were $33.9 million, a 22% drop when compared to the year-ago period. The huge fall was attributable to a large drop-off in license fees and service revenue, which declined to $3 million in the quarter from $9.8 million last year, and a 12% overall drop in product sales. Thankfully, Wall Street was expecting the big decline and had actually only projected quarterly revenue of $31.9 million, so this result actually represents a nice surprise.

Unfortunately, the company struggled to translate the better-than-expected revenue into a beat on the bottom line. Net loss for the quarter came in at $24.3 million, or $0.35 per share, which was much worse than the $0.28 loss analysts were expecting. On a non-GAAP basis, the net loss per share was only only $0.05, but that was still higher than the $0.01 that was recorded in the same period last year.

Traders appear to be selling off shares today in response to the lower than hoped for earnings. Still, if you zoom out and look at Spectrum's year-to-date returns it's still far outperforming the SPDR S&P Biotech ETF. 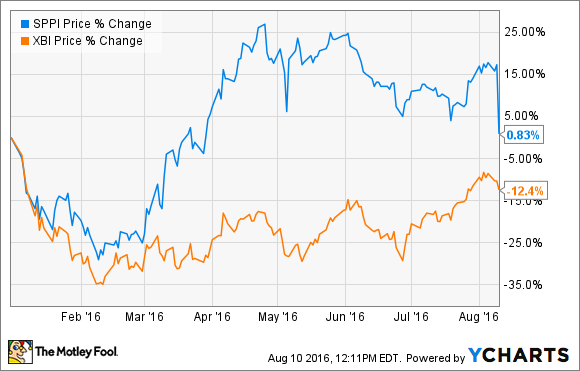 Now what: Analysts are currently projecting that the company's top line is going to continue to wane for some time. Forecasts call for a 17% drop in total revenue this year year, followed by another 14% plug in 2017. That fact is putting a lot of pressure on the company's pipeline to bring new drugs to market and help stem the decline. Thankfully, management had some optimistic news to share with investors on that front.

Qapzola, the company's potential treatment for non-muscle invasive bladder cancer, is currently pending FDA review. Spectrum will be presenting data on the drug next month at an FDA advisory panel, and its PDUFA date is scheduled for December 11, 2016.

Beyond that, enrollment has also begun for late-stage trials of SPI-2012, a compound that showed promise in Phase 2 studies as a treatment for breast cancer.

Still, until those new products find their way to market -- which isn't a given -- it's hard to get excited about owning shares of a company with falling revenues and profits. Potential investors might want to wait until they have more information on how Qapzola's FDA panel review goes before they look at today's plunge as a buying opportunity.

Why Spectrum Pharmaceuticals, Inc. Is in the Red Today @themotleyfool #stocks $SPPI $XBIT Next Article
Current