What: Several catalysts drove Whiting Petroleum's (NYSE:WLL) stock down in July. While slumping oil prices did not help, crude was not the only weight on the stock last month: 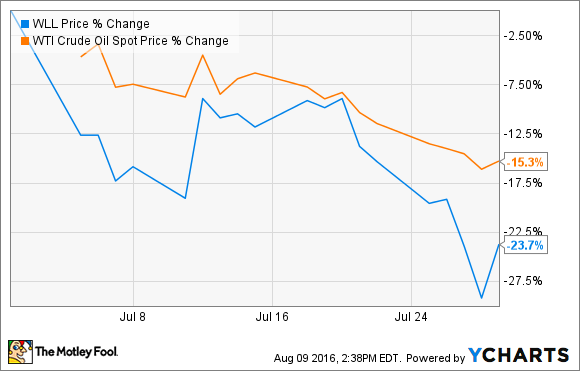 So what: Whiting's July slide started after analysts at Goldman Sachs downgraded the stock from buy to neutral, while trimming their price target by $1 to $12.75 per share. They were not pleased with the company's decision to exchange $1.06 billion of its legacy notes for new mandatory convertible notes because the conversion has the potential to be highly dilutive. Instead, analysts would have preferred that the company sell non-core assets to cut debt. That said, about a week later analysts at Credit Suisse upgraded the stock from neutral to outperform, and boosted their price target by $1 to $14 per share. They did so noting that assets sales remained a catalyst.

That upgrade looks ill-timed in hindsight because the company reported poorly received second-quarter results two weeks later. Whiting's loss was much wider-than-anticipated, with the company reporting an adjusted loss of $158.7 million, or $0.70 share, which missed the consensus estimate by $0.25 per share. Further, despite the renewed weakness in oil prices, the company entered into another participation agreement, which will allow it to drill an additional 30 wells this year. Further, it announced plans to complete 16 more wells this year from its drilled uncompleted (DUC) inventory. Those two programs will require the company to spend an incremental $50 million this year, which represents a 10% increase in its capex budget.

In addition to the earnings and capex update, Whiting Petroleum announced that it sold its North Ward Estes properties for $300 million in cash plus the potential to receive up to $100 million more in the future depending on oil prices. That sale turned out not to be the catalyzing event that analysts expected, largely because of Whiting's plan to boost capex instead of paying off more debt.

Now what: Investors are worried that Whiting Petroleum is getting a little bit ahead of the market by increasing production and capex while oil prices remain volatile. They would rather the company use its cash to pay down debt and save its uncompleted wells for higher prices. It is a decision that could come back to haunt the company if prices continue to tumble or even stay at current levels, putting the spotlight back on its debt-heavy balance sheet.