What: Shares of Cirrus Logic (NASDAQ:CRUS) rose 25.3% in July 2016, according to data from S&P Global Market Intelligence.

So what: The month started with a painful analyst downgrade, but Cirrus recovered quickly from that setback.

At the tail end of July, the maker of signal-processing chips came through with a solid first-quarter report -- including great guidance for the next period and strong hints that Apple (NASDAQ:AAPL) will deepen its ties to the company. Share prices skyrocketed 18% higher the next day.

Cirrus exceeded Wall Street's consensus earnings and revenue estimates in the first quarter, and also passed the high end of its own guidance ranges.

Looking ahead, Cirrus expects big things from the emerging market for digitally connected headsets. A few Android smartphones already ditched their traditional headphone jacks in favor of connecting headsets through the Class C USB port. Next up, an unnamed customer that almost certainly rhymes with "chapel" is following suit in the next version of its popular smartphone line. If that model doesn't rhyme with "thighbone Kevin," I'll be shocked. 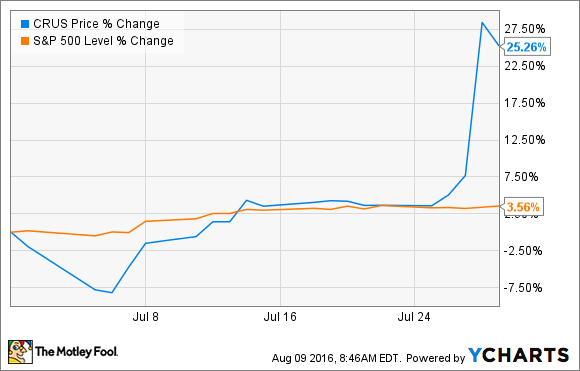 This development also points to a broader revenue stream in future quarters, as many companies not named Apple surely will want to build headphones with perfect iPhone compatibility. Chances are, they will look to the original source for an audio controller chip.

Cirrus shares have now gained 72% so far in 2016. That includes a market-beating 5% surge in August, as July's momentum carried over.