What: Shares of NVIDIA (NASDAQ:NVDA) rose 21.5% in July 2016, according to data from S&P Global Market Intelligence.

So what: The surge started on July 6, when the chip designer introduced the first consumer-level graphics card based on its new Pascal architecture. The product was well-received, and NVIDIA shares closed 3% higher that day. The news percolated through the hardware enthusiast community, then to Wall Street analysts, and the stock had gained a total of 11% a week later. 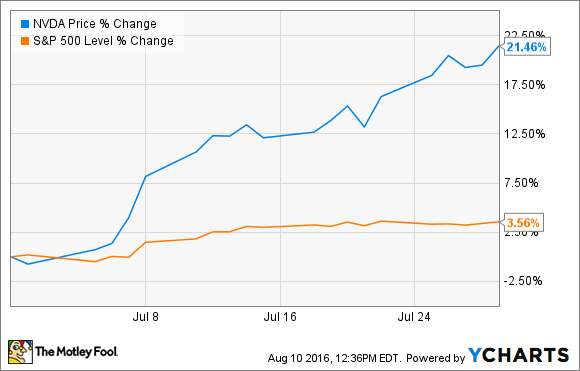 Now what: The stock has climbed another 5% in early August, powered by market momentum and strong product reviews. The company will report second-quarter results on Thursday night, likely triggering another sharp move in share prices.

I don't know which direction that move will take, but NVIDIA does have a lot to prove here. Share prices have skyrocketed 150% higher over the last 52 weeks, and the stock trades at a generous 50 times trailing earnings. NVIDIA is priced for pure perfection. The company could indeed deliver on that promise, but nothing is guaranteed. Personally, I'm happy to watch this report from the sidelines.