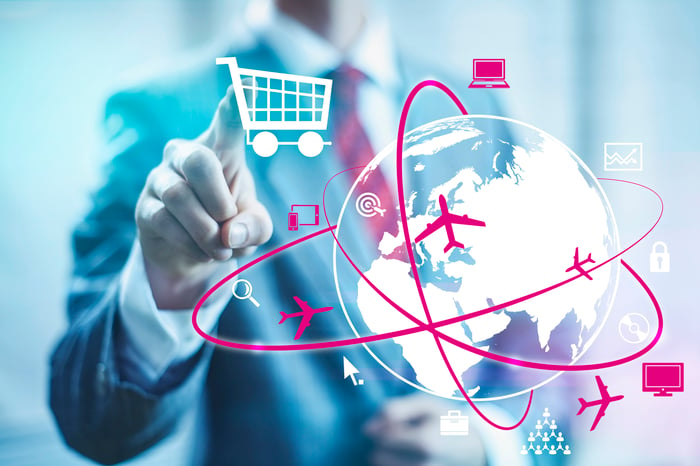 MercadoLibre (NASDAQ:MELI) stock is firing on all cylinders lately. Shares of the e-commerce leader in Latin America have gained over 50% in the past 12 months, trading near historical highs for the company, in the neighborhood of $170 per share.

Let's look at the main reason behind this impressive performance from MercadoLibre, and what it means for investors in the company going forward.

Booming in a difficult environment

Brazil, Argentina, and Venezuela are respectively the first, second, and fourth biggest markets for MercadoLibre in terms of revenue. Brazil and Argentina have been struggling with anemic economic growth and rising inflation levels over the past several years. As for Venezuela, the country is in the midst of a terrible economic, political, and humanitarian crisis.

No company operates in a vacuum, and even the best businesses can deliver disappointing financial performance when economic conditions aren't helping. However, MercadoLibre is not only producing solid growth, but the business is even accelerating.

The company reported 43.7 million items sold on its platform during the second quarter of 2016. That's a 44.7% year-over-year increase and represents the highest growth rate MercadoLibre has experienced since 2009. Gross merchandise volume was over $2 billion, a 21% increase in U.S. dollars and a 67.9% jump in local currencies.

MercadoLibre owns a digital-payments platform called MercadoPago, and this business is also gaining steam. Total payment volume amounted $1.8 billion last quarter, an annual increase of 50.6% in U.S. dollars and 101.6% in local currency terms. MercadoPago processed 31.9 million transactions during the period, growing 76% versus the second quarter in 2015.

Other business segments, such as shipping and advertising, are relatively smaller, but they're showing promising potential. Items shipped through the company's shipment platform, MercadoEnvios, grew 104% year over year to 20.3 million units. Advertising revenue grew 124% in local currencies last quarter, and more than half of those revenues came from mobile devices.

Management is doing a sound job of transforming the company's operational growth into increasing revenue and earnings for shareholders. Sales amounted to $199.6 million during the quarter, growing by 29.4% in U.S dollars and 72.5% in local currencies. MercadoLibre retained 16.1% of sales as operating profit during the period.

MercadoLibre has 158.6 million users on its platform as of the end of the second quarter of 2016, growing 19.9%. The population in Latin America is around 627 million people, and internet penetration is still relatively low, at nearly 61%, versus 88.5% in the United States. As an emerging middle class in Latin America continues joining the e-commerce revolution over the years and decades ahead, the trend bodes remarkably well for investors in MercadoLibre.

The main risk to watch

One of the main risk factors to watch is competitive risk. After all, MercadoLibre is substantially smaller than global competitors such as eBay (NASDAQ:EBAY) and Amazon.com (NASDAQ:AMZN), and the company could face considerable pressure if bigger industry players decide to broaden their presence in Latin America in the not-so-distant future.

eBay owns 18% of MercadoLibre, and the company is making all kinds of acquisitions to improve the customer experience and accelerate growth. Among other moves in recent months, eBay has purchased Sweden-based artificial-intelligence provider ExpertMaker, Israel-based predictive-analytics start-up SalesPredict, and international ticket marketplace Ticketbis. With this buying spree in mind, it doesn't sound unreasonable to consider that eBay could be interested in placing a bid for MercadoLibre, as opposed to increasing its competitive pressure in Latin America.

Amazon is a different story, though, since the online retail juggernaut is famously known for its relentless competitive drive. However, Amazon is mostly an online retailer, while MercadoLibre is an e-commerce facilitator. While many brick-and-mortar retailers consider Amazon a major threat, MercadoLibre provides a proven and successful platform for these companies to expand into e-commerce.

MercadoLibre is mainly focused on transactions inside a particular country, and since many countries in Latin America have significant regulations that limit international trade via e-commerce, international competitors such as eBay and Amazon could come up against serious limitations. MercadoLibre also has the first-mover advantage and a powerful brand presence in its main markets.

In any case, even if competition increases in the future, the e-commerce industry in Latin America should offer enough room for multiple companies such as Amazon, eBay, and MercadoLibre to profit over the long term. Investors in MercadoLibre may want to keep a close eye on the competitive landscape, but the company looks strong enough to withstand increasing competitive pressure.

MercadoLibre is delivering impressive growth in times when several of its biggest markets are going through plenty of economic instability. If this is the kind of performance the company can produce with the wind blowing against it, just imagine what it can do under more favorable conditions.