Fast-casual chain Shake Shack (NYSE:SHAK) will report second-quarter earnings the evening of Aug. 10. Despite continued business expansion, the stock has been choppy this year. What should investors look for when results are released?

Setting the stage for the second quarter

Since becoming a public company in early 2015, Shake Shack has been expanding its restaurant locations. At the end of the last quarter, the count was up to 88 in the U.S., Europe, Asia, and the Middle East.

That brings new "Shack" openings up to 22 in the past year, an aggressive 33% increase. However, the stock has been in decline since last summer, when share prices neared $100. They're now hovering around $40. The drop was driven primarily by investors realizing that management expects to hold new openings at about 20 to 25 a year, effectively killing any unreasonable hopes of an overnight Chipotle (NYSE:CMG) story. 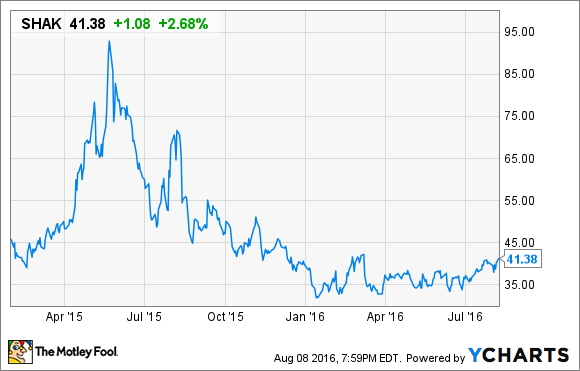 Ignoring the wild stock gyrations, the business has been in expansion both in store count and in increasing "same-shack" sales. Will the company be able to continue its success?

Investors will want to focus in on new restaurant openings yet again. After opening three new domestic locations in the first quarter, Shake Shack upped its estimate for full-year 2016 from 13 to 16 openings.

The current strategy is that about a third of these will be in brand-new markets and the other two-thirds in existing market. Look for some color especially on the new markets, primarily east of the Mississippi. With the company's first California location reportedly being well received early in the year, more first-market openings are expected in Texas and the Midwest.

In addition to the domestic market, the company also uses the franchise model to expand overseas. Thirty-six of the 88 locations at last count operated under this model, with another seven expected in 2016. The one new opening earlier in the year was in a new market, Oman, so investors should look for progress on the other six expected in the UK, the Middle East, and Japan.

Management also added a reminder in the last report about the new licensing partner in South Korea. The first Shake Shack is slated for late 2016, and a total of 25 locations are in the agreement over the next 10 years.

"Same-shack" sales numbers will also be a highlight. This metric measures average same-restaurant sales increases or decreases at locations open for more than two years. Shake Shack has been toting hefty increases since going public a year and a half ago. Positive word of mouth as the company grows, a focus on locating in high-density population areas, and new menu items have all been a contributing factor thus far.

Same-shack sales growth may have already hit a peak. After the 9.9% increase to start this year, management expects the full-year figure will come in between 4% and 5%. This would imply a slowdown through the rest of the year, but more clarity will no doubt be in order with new menu items and a slow rollout of breakfast at select restaurants under way.

Finally, profit margins will be in the spotlight. Shake Shack has been driving down operating expenses year-over-year as the business model matures. The company expects this to continue, with food, paper, and labor costs lowering as a percentage of sales through the end of the year. Also falling off of the year-over-year comparison timeline are the high admin expenses related with the company's public offering.

Still a small company, Shake Shack has a limited number of moving parts to keep track of. With a short-track record of growth under its belt, the company needs to continue doing more of the same for the stock to return to growth: open more locations and drive more traffic to them with new menu items, promotions, and positive PR.

As long as the trajectory remains positive, current owners of Shake Shack should continue to hold. Any pullbacks in price would be a good opportunity to pick up some more shares and average down in price, especially if you were unfortunate enough to buy at last summer's lofty valuation.