What: Shares of Ariad Pharmaceuticals (NASDAQ: ARIA), a mid-cap oncology company, gained close to 27% in July, according to data from S&P Global Market Intelligence. Given that the biotech didn't release its stronger-than-expected second quarter results until the tail end of the month (July 28th to be exact), the primary driver behind this noteworthy surge appears to be the growing speculation that Ariad is finally nearing a deal to sell itself. 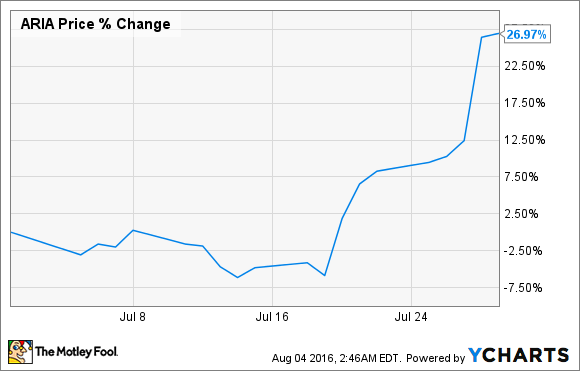 So what: Ariad has been the subject of buyout rumors for years at this point, and nothing has ever come of them. In fact, Ariad just signed an agreement with Incyte Corp. (NASDAQ:INCY) for its European division that includes regional commercial rights to the blood cancer drug Iclusig in return for $140 million upfront, potential milestone payments, and royalties on future sales. If anything, this piecemeal deal with Incyte seems to imply that a buyer probably isn't waiting in the wings at this point.

Now what: The silver lining is that Ariad recently initiated a rolling New Drug Application (NDA) for brigatinib with the FDA for patients with ALK+ non-small cell lung cancer (NSCLC) who are resistant to Pfizer's (NYSE:PFE) Xalkori. As the company is seeking an accelerated approval and has requested a priority review for brigatinib, there's a chance that Ariad could have its second cancer drug on the market by perhaps mid-2017. Unfortunately, this drug probably won't garner much in the way of sales as a later-line treatment for ALK+ NSCLC. Pfizer's Xalkori, for example, only generated $137 million in worldwide sales in the second quarter of 2016, despite sporting a label that's far broader than the one brigatinib's initial NDA is targeting.

The bottom line is Ariad is likely going to need to wait until brigatinib's ongoing phase 3 trial as a front-line treatment for ALK+ NSCLC wraps up in 2019 to attract a worthwhile buyout offer. Fortunately, the biotech has significantly shored up its balance sheet of late, thanks largely to its deal with Incyte. Specifically, Ariad reported in its second quarter earnings release a nice uptick in cash, cash equivalents, and marketable securities to $278.5 million, compared to $168.3 million a year ago. As such, Ariad should have the bulk of the financial resources necessary to see it through to the end of brigatinib's front-line phase 3 study, especially if brigatinib grabs its first approval in early 2017.