So what: As land drillers, one of the most important metrics worth following is the U.S. active rig count. This is a proxy for the overall health of the drilling industry in this country. This quarter, though, there were some mixed results. Even though there was a slight uptick in active rigs, all of these companies experienced some significant declines. 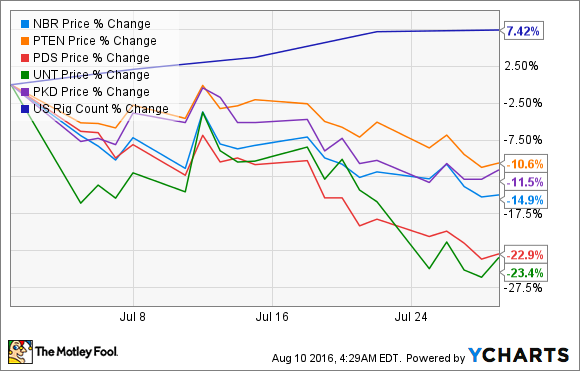 There are two big culprits when it comes to why these companies didn't follow the path we might expect. The first and biggest is that gas prices worsened in July. At the beginning of the month, oil prices were in the $50-a-barrel range. At that price point, much more oil in U.S. shale basins can be extracted and get a return. So there was some thought that we might see a larger uptick in drilling activity. In several conference presentations and conference calls, management at these companies were even saying that at that higher price point, they were fielding calls from producers to put more rigs to work if prices were to remain in that range for some time.

As oil prices started to decrease again, though, so too did the chance that we would see a big increase in drilling rigs. In Precision Drilling's earnings report on July 21, the company said that the company was now expecting total rigs to remain flat or even decline again in the U.S. for the second half of the year as larger producers scale back production.This will be extremely taxing on these companies as most of them are already posting losses and burning through operational cash. For Nabors, Precision, and Parker, it also doesn't help that they are dealing with larger debt loads that are eating into overall results.

Unit Corp is a bit unique in comparison to the rest of the group here because the company also has an exploration and production and a midstream segment. While having some diversification can help with cash flows, a decent portion of its rig fleet is ill equipped to meet the needs of more demanding shale drilling work and its other segments have suffered similar declines as its contract drilling segment.

Now what: It doesn't look like there is going to be much relief for rig companies for the rest of 2016. With the exception of a few companies with some of the best acreage positions in the Permian Basin, producers are scaling back on spending as the price recovery so many were hoping for has failed to materialize. For drillers, that means less work for rigs and lower contract rates for those receiving new work. When all of these companies reported earnings in recent weeks, all four noted major operational cost savings that have helped keep quarterly results from being any worse than they already are. If this downturn lasts for much longer, though, a couple of the companies here will struggle to make ends meet without making some desperate moves to repair their balance sheets.