What: Shares of video infrastructure-provider Harmonic (NASDAQ:HLIT) jumped on Wednesday following the company's second-quarter earnings report. Harmonic beat analyst estimates for both revenue and earnings, a feat which propelled the stock 16% higher by 11:30 a.m. EDT.

So what: Harmonic reported second-quarter non-GAAP revenue of $109.5 million, up from $103.1 million during the prior-year period and about $5 million higher than the average analyst estimate. Bookings rose 18% year over year, to $117.3 million, driven by both the video-products and cable-edge segments.

Non-GAAP EPS came in at a loss of $0.2 million, or approximately breakeven on a per-share basis. This compares to a net profit of $4.2 million, or $0.05 per share, during the second quarter of 2015. Analysts were expecting a loss of $0.04 per share.

Harmonic CEO Patrick Harshman pointed to a record backlog and opportunities during the second half of the year.

Our financial results for the second quarter of 2016 were at the high end of our plan for both our Video and Cable Edge segments. Consequently, we enter the second half of the year with record backlog and deferred revenue. Our new CableOS products are scheduled to begin shipping in the fourth quarter of this year, and we remain on track to realize targeted synergy savings from the combination of Harmonic and TVN. 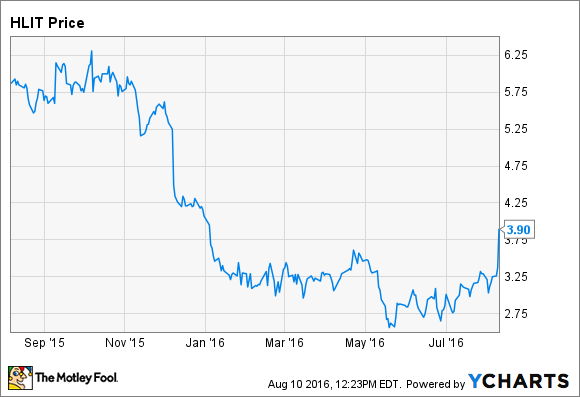 Even after Wednesday's gain, shares of Harmonic are still well below highs reached in 2015. The company's acquisition of Thomson Video Networks last year sent the stock tumbling, and it's still a long way from fully recovering.