What: SodaStream (NASDAQ:SODA), a maker of at-home beverage machines, saw its stock pop by 13% over the month of July, according to data provided by S&P Global Market Intelligence. 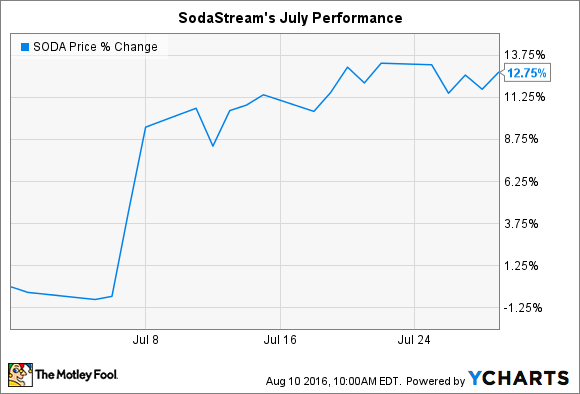 That surge contributed to an epic rally for shareholders -- who are up 70% so far in 2016.

So what: Investors bid up the stock last month as optimism rose regarding SodaStream's turnaround plan. The company announced in May that it had returned to sales growth following nearly two years of declines. SodaStream had been executing a risky -- and expensive -- brand reboot over that time to shift its focus away from a shrinking soda market and toward the growing sparkling-water niche.

Now what: It turns out that investors were right to bet on a strengthening business turnaround. In early August SodaStream posted 17% higher sales -- compared to a 10% boost in the prior quarter -- and logged improved profitability as well. The company sold 30% more carbonation machines around the world and boosted market share in the key U.S. geography.

That growth was important for two reasons. First, it implies that CEO Daniel Birnbaum and his executive team have found an advertising approach that resonates with sparkling-water fans, which suggests the brand pivot is working. Second, a bigger base of homes with SodaStream machines on their countertops will power a spike in growth of highly profitable sales of carbon dioxide canister refills and beverage-flavoring packets.

The upcoming holiday shopping season could prove critical to the company's turnaround hopes. If SodaStream can build on its early momentum by getting more of its products onto retailers' shelves and then into customers' homes, it can then start accruing strong profit growth from its recurring usage sales. If management misjudges demand instead, or overestimates the new brand's appeal, then margins will take a hit as executives cut prices to keep inventory levels down. SodaStream's last two holiday seasons were brutal for the business, but the company is in untested territory now that sparkling water is its core selling point.