Wal-Mart (NYSE:WMT) completed the biggest acquisition of an e-commerce start-up in history earlier this week, buying Jet.com for $3.3 billion.

Wal-Mart will pay $3 billion in cash and $300 million in stock over the next five years for the year-old company that was launched as a challenger to Amazon.com (NASDAQ:AMZN) for online retail supremacy. Since news of the deal broke, Wal-Mart has been criticized by several corners of the media for overpaying for the start-up, but there are plenty of reasons why it could prove to be a smart move. 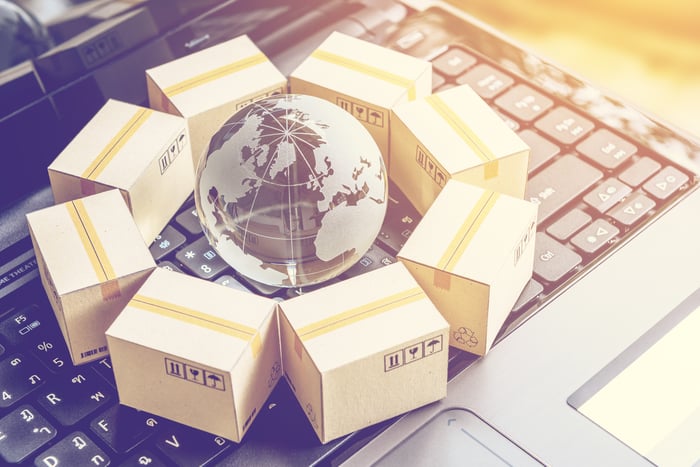 1. Wal-Mart could use the help

Jet.com may only be a year old, but the company has already reached an annual run rate of $1 billion in sales, something that took Amazon four years to accomplish. Jet's marketplace model, however, means that it generates significantly less than that as actual revenue.

Wal-Mart, meanwhile, has seen its e-commerce growth rate slow each quarter over the last two years, falling to just 7% in its most recent report. E-commerce has taken on growing importance as same-store sales have slowed, Wal-Mart stores have saturated the country, and Amazon and other competitors have taken market share.

The company has struggled to gain traction in online retail despite intensified efforts in the space, including increased capital spending, launching a competitor to Amazon Prime called ShippingPass, rolling out online grocery pickup, and making several smaller acquisitions in the past.

With the Jet buyout, Wal-Mart gets much more than an additional $1 billion in sales. It gets access to the millions of names in Jet's customer base, which include a large number of urban and millennial customers that Wal-Mart has historically had trouble courting. It also gets access to Jet's proprietary infrastructure and technology. Its "Smart Cart", for example, features an algorithm that lowers prices as customers add more items to their order or give up returns.

Finally, Wal-Mart will add Jet.com founder and CEO Marc Lore, one of the leading minds in e-commerce, to its ranks. Lore's first company, Quidsi, the parent of Diapers.com and Soap.com, was sold to Amazon for $550 million in a bidding war with Wal-Mart. After spending two years inside the e-commerce leader, Lore departed to found Jet, the most ambitious company to challenge Amazon in several years. Lore will run Jet as well as Wal-Mart's e-commerce division once the deal closes.

It's difficult to value some acquisitions. Jet doesn't disclose revenue, but some analysts estimate its price-to-sales valuation is about six times, or about double that of Amazon. Though that may be expensive for an unprofitable and not-yet-proven company, it could be worth much more than that to Wal-mart if it allows the retailer to unlock increased e-commerce growth. Past big-ticket acquisitions like Facebook's purchase of Instagram and Google's takeover of YouTube were questioned by industry followers at the time, but both now look like steals, as they have become core components of each company.

And Wal-Mart isn't poor either. The $3.3 billion price is less than it generates in profit in an average quarter. The company spends most of that income on returning capital to shareholders. Last year, it returned more than $12 billion to shareholders in dividends and share buybacks, money that in no way helps its competitive position. For a company now struggling to grow, it's clear that e-commerce is a bigger priority than share repurchases, if not the company's single most important mission.

Notably, Amazon has also made big acquisitions on its way to e-commerce domination, spending more than $2 billion combined on Zappos, Kiva Technologies, and Lore's old company, Quidsi. If Wal-Mart had made those acquisitions instead, perhaps it would find itself in a different position today.

3. Wal-Mart is still the best-positioned company to challenge Amazon

Wal-Mart's profits, in addition to justifying the Jet acquisition, are also a key advantage against Amazon, and the retailer should be able to outbid Amazon on any company or asset they both value. It actually did top Amazon's bid for Quidsi, but at that point, the start-up had already signaled that it would sell to Amazon.

More importantly, the company has assets that no other retailer, online or off, can match. Those include a network of more than 4,000 stores across the nation, giving the company a location within five miles of 70% of the U.S. population. While Amazon is busy trying to build up its own shipping fleet to complement traditional logistics providers, Wal-Mart has one of the largest private trucking fleets in the country, with about 6,000 tractor-trailers that it will start using to support e-commerce operations.

The tech know-how, strategy, and innovation from Jet should also boost Wal-Mart's prospects, and its own logistics and economies of scale should benefit Jet.

Investors should remember that Wal-Mart doesn't have to beat Amazon in order to win -- it just has to accelerate growth in e-commerce to return the overall company to growth. In fact, the Jet acquisition offers evidence that Wal-Mart and Amazon may be moving in different directions. Long a champion of low prices, Amazon has shifted from that strategy in recent years with its Prime membership program, which places an emphasis on convenience over price. Wal-Mart, on the other hand, has branded itself on "always low prices", and Jet's pricing algorithm puts a similar emphasis on low prices. In fact, the company promised to be the cheapest retailer on the internet.

What could ensue, then, is a bifurcation in e-commerce as Wal-Mart targets more price-conscious customers and Amazon ramps up services for its Prime members, such as Prime Now, which promises delivery in under an hour, and Prime Fresh, the grocery delivery service.

Beyond the acquisition, the key for Wal-Mart will be to successfully integrate Jet, execute on an enhanced e-commerce platform, and grow demand. Wal-Mart's fortunes won't change overnight, but the acquisition is a sign the company's priorities are in the right place.

With $27 billion in annual operating cash flow, the company has plenty more firepower to pour into e-commerce if it chooses.