Ford Motor Company (NYSE:F) has produced record profits over the past couple of years and has had one very impressive turnaround story since the dark days of the Great Recession. However, slightly disappointing second-quarter results this year raised some concerns. Investors were left wondering: How much of an impact will the Super Duty launch have on third-quarter results? And are incentives getting out of control?

Fortunately for investors, we now have some insight into those two questions.

Super Duty is an unsung hero

Investors and consumers alike have heard Ford tout its highly profitable and massively popular F-Series truck as America's best-selling truck. The F-150 takes much of the glory, but many overlook just how important Ford's Super Duty really is.

The Super Duty accounts for roughly 43% of the U.S. market for heavy-duty pickups and generates roughly 30% of total unit sales across all F-Series vehicles. Not only that, but the 2017 Super Duty is actually the model's first complete product overhaul in 18 years -- and Ford decided to go big and bold.

Unfortunately, rebooting a massive vehicle like the Super Duty from the ground up comes with a hefty price tag. That's what has weighed down second-half 2016 earnings, according to management, but here's insight into just how much it will impact results in the short term. 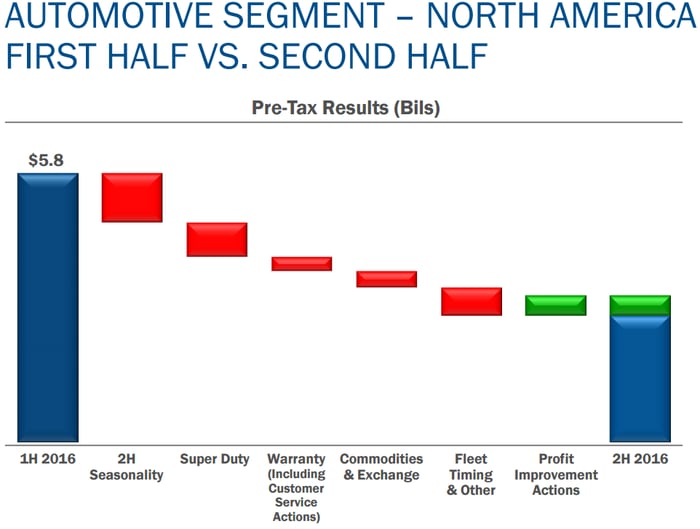 While investors may have been concerned due to the many comments during the conference call about Super Duty costs, those really only make up a portion of the overall headwinds that face Ford during the second half. The second-half slowdown of fleet sales may be the most overlooked negative impact coming up, surprisingly.

Incentives are regarded as pure evil within the automotive industry, and many only remember the past incentive wars that destroyed automakers' bottom lines. While we're currently far from an incentive war, investors are getting a bit anxious to see how much incentives increase as new-vehicle sales peak in America.

While the first half of 2016 can only offer a glimpse into the story, it at least gives us some perspective.

Starting with passenger cars, Ford's incentives as a percent of vehicle price increased 200 basis points, to 16%, for the first half of 2016 compared to the prior year. That was a decent amount higher than the industry average, which increased 130 basis points, to 13.1% of passenger-car prices, over the same time frame.

With regard to SUVs, Ford's incentives as a percentage of vehicle price actually declined by 10 basis points during the first half of 2016, down to 12.3% year over year. That was also higher than the industry average of 8.3%. Meanwhile, the narrowest gap belongs to Ford's truck/van segment, which increased 90 basis points, to 8.9%, compared to the industry average of 8.7%.

Sure, expectations for Ford's second half are lower, but the short-term pain for the important Super Duty reboot will be a solid long-term gain, and while incentives are trending higher for Ford, they're being recouped as its vehicle prices are accelerating faster than the industry average.