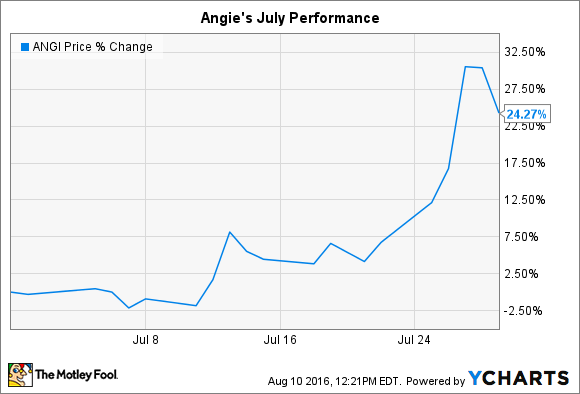 The rally barely pushed shares back to the level they reached in the prior month, though. Angie's list remains down 10% so far in 2016.

So what: July's rally was sparked by evidence of a growth rebound. In early June, Angie's List removed its home-services review paywall in hopes of generating better engagement from a larger pool of users.

The company succeeded in that goal: New member signups surged to almost 700,000 in the three weeks following the switch to a new business model. "The launch results have been excellent and have exceeded the already strong results we had previously reported in the pilot freemium markets that we began testing in January," CEO Scott Durchslag said in a press release.

Now what: Angie's List hopes to turn many of those newly acquired members into paying subscribers over time, and so the growth of its paid tiers will be important to watch. The renewal rate, which dove to 74% from 77% this quarter, is also a key metric to follow.

Given the fundamental business-model shift, it's harder than usual to forecast sales and profit trends for Angie's List. Durchslag and his executive team, while saying that they're currently seeing "exponential" gains in user engagement and member signups, declined to offer any financial guidance in conjunction with the July 27 earnings report.

Investors should take management's optimism with a grain of salt, since it isn't clear how profitable the new business approach will turn out to be. However, it's good news for shareholders that Angie's List has held revenue steady while producing a profit over the first six months of 2016 -- even as it ramped up business investments and opened up its review database to the public.