The downside of Plan B.

Chesley Sullenberger intentionally steered an Airbus A320 into the Hudson River with 150 passengers onboard. Which is something you should never, ever do.

Unless your plane has lost power and the only other option is to crash into the world's second largest city. Then it is absolutely the best thing to do, and will turn you into a hero.

Awful decisions can be smart if the alternative is worse. This is obvious in Sullenberger's case, but easy to forget in situations where the stakes aren't as high.

Buy-and-hold investing is the most logical and data-proven method of investing for individual investors. This is generally accepted among the investment community. But there will always be detractors, many who use data to make points that sound reasonable.

I recently made a chart of all the smart-sounding temptations to sell during a period when the market went up 100-fold. Blogger Austin Frank responded that this didn't prove much. "'Buy and Hold' is a Fairy Tale," he wrote.

His most compelling argument — the most common argument people use to discredit buy-and-hold investing — is that from the mid-1960s to the mid-1980s (almost a whole generation) real stock returns were flat. You made no money at all.

Supposed you had sold in 1962  —  you were spooked out of the market by the Bay of Pigs debacle. Truth is, you didn't miss out on much; returns were zero for the next two decades.

This is true. You can see it in the chart. The 1960s-1980s bear market lasted so long it was almost old enough to drink.

But what was the alternative?

That's the only relevant question. If you shouldn't have owned stocks during this period, you had to do something else with your money. And there are two other places where the vast majority of investors could put their money: bonds and cash.

To judge whether it was smart to own stocks from the 1960s to 1980s, we have to compare against those alternatives.

You can see where this was going. The only thing more miserable than stocks during this period were bonds and cash. 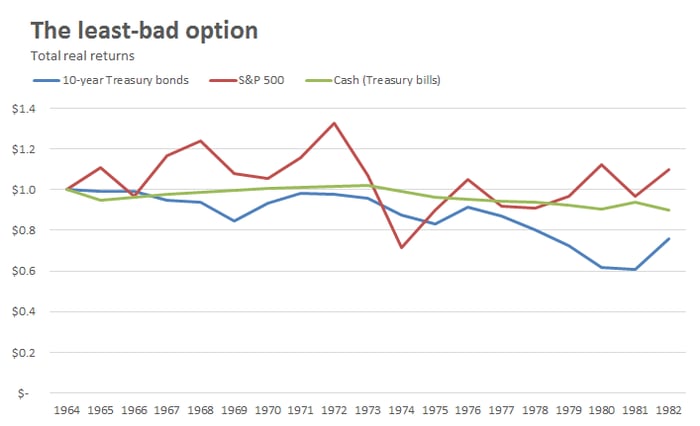 Stocks were basically flat during this 20-year period. That's landing in the Hudson. Bonds lost nearly a quarter of their value after inflation. That's crashing in the Bronx.

In hindsight we can poke fun of the poor buy-and-hold souls who waited 20 years for nothing. But they did better than the majority of people who did anything else. Sure, you could have owned gold, or oil, or timber — all of which surged during these 20 years. But you're kidding yourself if you think you could have timed those trades just right, especially since commodities were decimated in the early 1980s as the economy recovered. And sure, you could have bought and sold stocks at opportune times, riding the ups and avoiding the downs. But not one investor in a million actually pulled this off.

Daniel Kahneman summed it up so well in his book Thinking Fast and Slow:

The wisdom of buy and hold is not that stocks always outperform. They don't. And it's not that you'll always get rich over time. You won't. It's that stocks tend to be the best-performing asset over long periods of time, and trying to shorten that time by jumping in and out of other assets is the express lane to misery and regret.