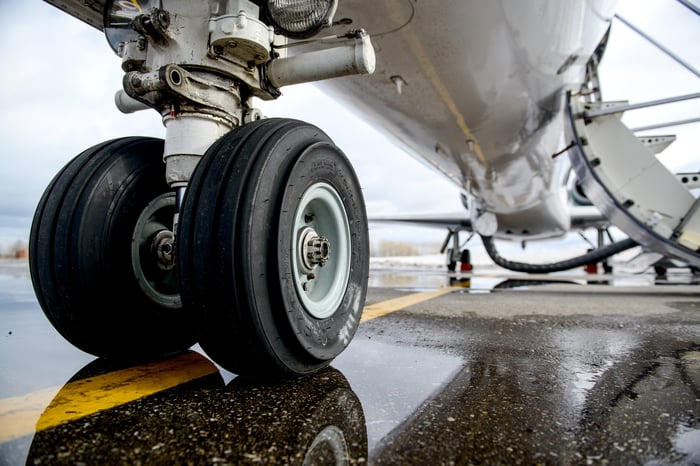 In general, companies that make airplanes have done extremely well lately, with high demand for new aircraft helping to drive strong financial results for the industry's biggest players. Yet regional jet specialist Embraer (NYSE:ERJ) hasn't enjoyed the same success as some of its larger peers, and its stock has mirrored the company's shortcomings by posting subpar performance. Coming into its second-quarter financial report, Embraer investors wanted to see more signs of a potential turnaround. What they got instead was a surprising loss, a provision for costs of settling charges of corruption, and subsequent news of layoffs to try to cut expenses. Let's look more closely at what Embraer said and why investors are worried about the company going forward.

Embraer's second-quarter results reversed the positive momentum that the company had built up earlier this year. Revenue of $1.37 billion was down nearly 10% from year-ago levels, falling far short of the $1.44 billion consensus forecast among those following the aircraft-maker's stock. Embraer reported a GAAP net loss of $99.4 million, and even taking into account some extraordinary items, adjusted earnings of $0.24 per share was down by almost two-thirds from year-ago levels and was about $0.20 per share less than investors had wanted to see.

Looking more closely at Embraer's results, you can see the contributing factors that led to its overall weakness. The volatile executive jet segment was the big loser during the period, seeing revenue fall by more than a quarter from year-ago levels. Declines for the commercial aviation segment were more modest at 3%, but the fact that the company couldn't make sales rise in such a favorable environment speaks to Embraer's execution challenges. Similarly, a 3% drop in defense and security sales didn't offer any relief for Embraer's top line. The only good news was that the figures for commercial and defense were generally better than the company did in the first quarter of 2016.

From a delivery standpoint, Embraer's business picked up slightly from the first quarter's slow pace. The company delivered 26 commercial aircraft, including 21 of its Embraer 175 regional jets. Yet the totals were one less than it posted in the second quarter of 2015, again confirming a failure to take full advantage of the industry's boom. Executive jet sales included 23 light jets and three large jets were down from year-ago figures and mixed compared to the first quarter, during which a smaller number of jets were sold but which included more large-jet deliveries. Backlogs stayed steady at $21.9 billion, flat over the past three months but down $1 billion since this time last year.

More problems ahead for Embraer

The difficulty for Embraer stemmed from two main pieces of bad news. First, the company said that it had established a $200 million loss contingency connected with an investigation by the Securities and Exchange Commission and the U.S. Department of Justice related to alleged violations of the U.S. Foreign Corrupt Practices Act. Embraer said that it has sought to improve its compliance practices, but the allegations of corruption with respect to aircraft sales could produce some reputational damage for the aircraft maker going forward.

Also, Embraer cut its guidance for the full 2016 year, due mostly to underperformance on the executive jet front. The company expects five fewer light jet deliveries and five fewer large jet deliveries, reducing its guidance ranges to between 70 and 80 light jets and between 35 and 45 large jets. Embraer also reduced its earnings guidance by $0.20 to between $5.80 and $6.20 per share, with a hit to executive-jet profitability being the primary contributor.

Since the release, Embraer has taken further steps to boost profits. In particular, the company said earlier this month that it would introduce a voluntary plan to cut its workforce in Brazil, in the hope that it can produce savings of about $200 million in combination with other cost-cutting efforts.

Embraer stock plunged in response to the earnings announcement, falling 14% on that day and failing to recover any considerable ground since then. If the company can't benefit from the favorable environment for aerospace sales, then Embraer investors will have to prepare for continued weakness in the share price in the months to come.