Deviating from its normal practice when it reported second-quarter results, electric-car maker Tesla Motors (NASDAQ:TSLA) didn't provide any guidance for third-quarter vehicle deliveries, opting instead to offer guidance for the third and fourth quarter combined. But a close look at some key information in the company's most recent quarterly report still provides an idea of what investors could expect.

Why Q3 is important

Tesla is behind schedule. In its second quarter, the company delivered 14,402 vehicles -- 9,764 Model S and 4,638 Model X. The figure was significantly below the company's guidance for 17,000 units and meant Tesla would need a huge second half in order to meet its guidance for 80,000 to 90,000 deliveries by the end of the year, as Tesla only delivered about 29,200 vehicles during the first half.

After missing its guidance for two quarters in a row, Tesla has opted to lower its expectations for full-year deliveries. Now it's saying it expects to deliver about 79,200 vehicles during the entire year -- up from about 50,600 in 2015.

Despite the pullback in its guidance, Q3 is still very important because Tesla will need a significant ramp-up in production in deliveries in the second half in order to deliver 79,200 vehicles. It will need to deliver 50,000 vehicles in Q3 and Q4 combined, or a whopping 71% more than it delivered in the first half and nearly as many as it did during the entire year of 2015. 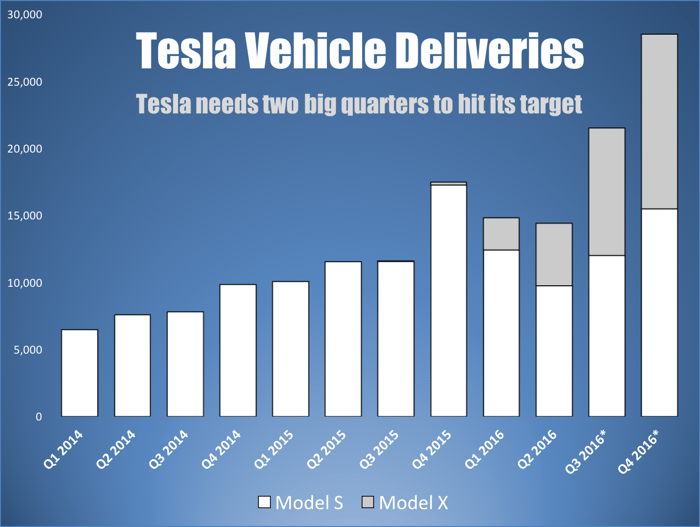 But there's more reason to be interested in Tesla's third-quarter deliveries than the steep production ramp implied by guidance for the second half. Earlier this year, Tesla moved its target for achieving an annualized 500,000-unit build rate two years earlier -- from 2020 to 2018; with such an ambitious goal closing in fast, Tesla's ability to execute on its near-term goals may make or break investor confidence in the company's bigger, long-term targets.

You can bet investors will be watching Q3 closely.

It's going to be a big quarter

So, what can investors expect from Q3? One thing is almost certain: Deliveries will likely be significantly higher than they were in Q2.

Beyond the company's guidance for 50,000 deliveries in the second half, here's what else investors can take into consideration when trying to forecast third-quarter deliveries.

First, investors can consider the company's noted 67% year-over-year jump in net new vehicle orders during Q2. Looking back to Tesla's third-quarter deliveries in 2015, which should somewhat reflect the prior quarter's orders, it's likely net new orders in the second quarter of 2016 were probably somewhere around 19,300.

Tesla's slower-than-expected ramp-up of Model X production has played a key role in the company's worse-than-expected deliveries in the first half, but management says it has resolved production issues. Image source: Tesla Motors.

Finally, Tesla said it exited Q2 producing 2,000 vehicles per week and expects to end the third quarter at a steady production rate of 2,200 vehicles per week. This implies production of about 26,000 or more units during Q3. Of course, all of these vehicles won't be delivered during the quarter -- but it highlights how vehicles delivered during the first half of the quarter could help boost sales if Tesla manages to deliver a good chunk of them.