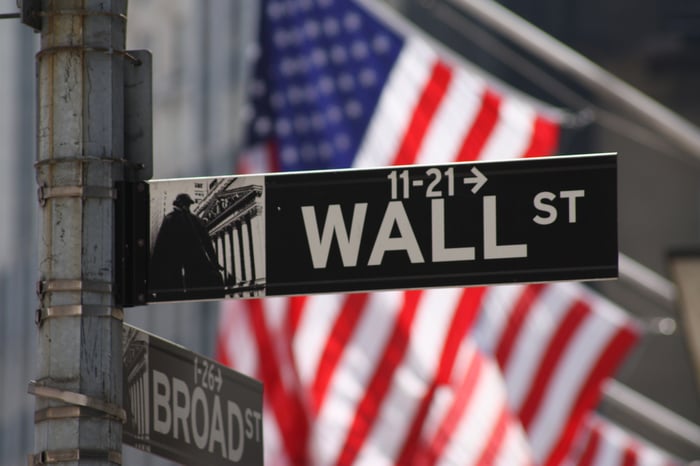 U.S. stocks took a breather on Friday, a day after all three major U.S. stock indexes recorded record highs on the same day for the first time since 1999. For the week, the Dow Jones Industrial Average (DJINDICES:^DJI) and S&P 500 (SNPINDEX:^GSPC) ended up 0.17% and 0.05%, respectively.

Part of the driving force behind the indices hovering near record highs is that investors seem skeptical the Fed will raise interest rates soon, especially as central banks in Europe and Japan continue to loosen monetary policy.

In terms of U.S. economic data, U.S. retail sales were flat in July as sales at retailers and restaurants held steady at a seasonally adjusted $457 billion last month, according to the Commerce Department on Friday. Excluding autos, though, retail sales fell by 0.3% last month. That was a weaker-than-expected 0.1% climb, excluding autos, and much lower than last year's total retail sales gains of 2.3%.

Although, wouldn't you know it, despite the mediocre retail results, some of the top performers in the S&P 500 this week were all clothing retailers. Let's take a look at some of their highlights.

Shares of Macy's Inc. (NYSE:M) jumped 17% on Thursday after the company announced better-than-expected second-quarter results. Not only did it beat analysts' expectations, it offered a plan to drive profitable growth for shareholders -- more on that in a second.

Macy's second-quarter revenue declined 3.9% compared to the prior year, down to $5.87 billion. Same-store sales fell 2% on an owned-plus-licensed basis and declined 2.6% on an owned basis. Though the $5.87 billion in revenue was down from the prior year, it was still ahead of analysts' estimates of $5.74 billion. Looking at the bottom line, Macy's adjusted earnings per share declined 15.6% to $0.54 per share but were well ahead of the $0.45 per share analysts estimated. 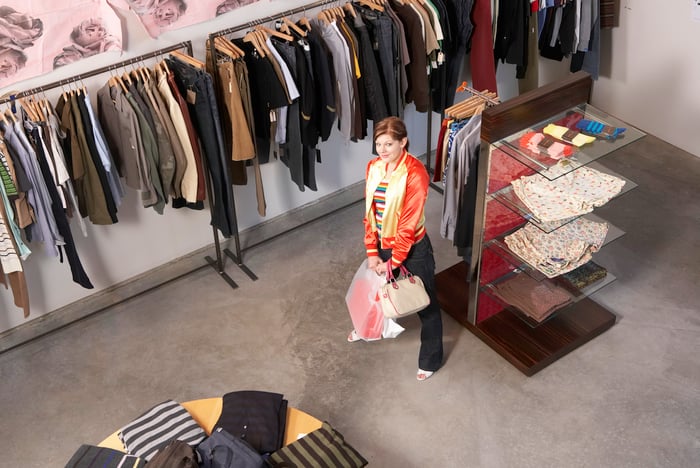 Aside from Macy's second-quarter figures, the company released details on its strategy to drive growth, which included the plan to close roughly 100 of Macy's 728 full-line stores. The plan calls for most of these stores to close early in 2017, with the remaining to close as leases and other requirements expire or are dealt with.

The implications of the strategy will be a slight decline in Macy's top-line sales, but management believes the reduction in EBITDA is likely to be offset by expense savings. Further, Macy's will focus its talent and resources on the best-performing stores. Ultimately, it's probably a healthy move for Macy's considering the increasing trend of e-commerce; if a significant store reduction can improve margins and increase Macy's return on invested capital (ROIC), this will pay off for investors in the long run.

Ralph Lauren (NYSE:RL) was another clothing retailer to have a strong week, with shares jumping as much as 11% intra-day Wednesday after the company beat fiscal 2017 first-quarter estimates. Ralph Lauren's first-quarter revenue fell 4% down to $1.55 billion, which was still better than analysts' estimates of $1.53 billion. The top-line decline was better than its same-store results, which fell 6%.

The bottom line was the hero for investors, though, as the owner of Polo posted adjusted earnings of $1.06 per share, which was a slight decline from last year's $1.09 but far ahead of the $0.89 estimated by analysts. Further, one big positive for investors was that only a couple of months after introducing a turnaround plan, Ralph Lauren has shown progress.

We have made good initial progress in the execution of our Way Forward Plan. We will continue to balance driving near-term performance with the pursuit of our long-term vision. We have already completed the planned right-sizing of the organization and are well under way in building the leadership team that will have the strength to successfully execute the plan.

For investors watching Ralph Lauren's attempted turnaround, there are many things to consider over the next few years. Management hopes to reduce lead times from 15 months to nine; continue closing less desirable stores, strengthening product assortments and cutting unproductive styles; and improve marketing and shopping campaigns. This quarter was a step forward, but investors can expect a volatile ride from here on out.

Well, it's better than really bad

Holding with the theme of weaker year-over-year results, but better than estimates, is Kohl's Corp. (NYSE:KSS). Shares of Kohl's surged on Thursday following the company's second-quarter earnings report. Despite the rising stock price, Kohl's posted a decline in sales and also cut guidance -- but hey, it beat estimates.

Looking at the data, Kohl's second-quarter revenue declined 2% to $4.18 billion, but it was roughly $20 million higher than analysts forecast. Comparable-store sales dropped a similar 1.8%, which wasn't as bad as the 3.9% year-over-year decline recorded during the first quarter.

On the bright side, thanks to cost cuts and a decline in SG&A, Kohl's earnings per share excluding one-time items checked in at $1.22 -- up from the prior year's $1.07 per share. Despite the better-than-expected bottom-line result, management reduced full-year guidance from the previous range of $4.05 to $4.25 per share, down to $3.80 and $4.00 per share -- both excluding one-time items.

While these three clothing retailers were some of the best-performing stocks this week in the S&P 500, these results are more indicative of the challenges and pressure the stocks have faced over the past 12 months because, let's face it, they weren't spectacular. However, it's also possible the worst is over, and if these cost-cutting initiatives and store closings can help juice margins and improve the bottom line, the stocks could recover some of their lost momentum in the back half of 2016.