No matter what the industry, unless products and companies adapt, they die. That's especially true in the highly competitive automotive industry where a slightly outdated product or misstep in design can send sales spiraling out of control.

Take Ford Motor Company's (NYSE:F) Taurus for example, once one of the most popular passenger cars any Detroit automaker offered with sales nearing 400,000 units annually around 2000. Now, the Taurus has sputtered with sales failing to break 70,000 units in any year since 2006. The story appeared similar for Ford's Explorer, which posted annual sales over 400,000 units in the late 90's and early 2000's before bottoming out at 52,190 during 2009. 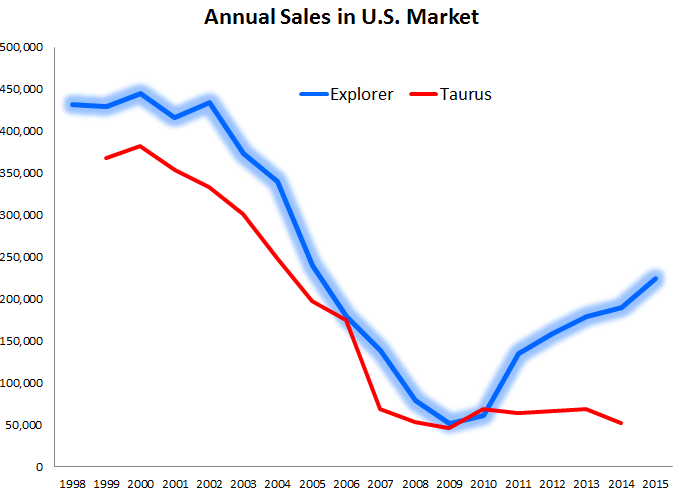 While the Explorer once generated a huge sum of profits for Ford, and it still does to some degree, it's adapted from being a high-volume seller to serve an additional purpose for the Blue Oval: lure in a new demographic.

Explorer is a hit with two key demographics

Earlier this spring Ford noted that the Explorer was in fact the most popular Ford SUV with millennial buyers ages 25 to 34. It's been a key demographic for automakers looking to secure loyalty with younger buyers that way they come back to the brand for many more purchases.

"Smartphones and skinny jeans, organic foods and reality TV. The wants of millennials have been well documented, and now there's a new one to add to the list – the space a Ford Explorer offers," read Ford's press release.

Further, according to HIS personal registration data, the Explorer was the most preferred midsize SUV among women buyers as of March. It's no surprise Ford's attacking these key demographics, as more and more women are becoming in charge of purchase decisions, and creating a young loyal consumer base is critical to maintaining future sales and market share, but it's great to see this being accomplished with a profitable product such as the Explorer.

Success isn't limited to those demographics

Those statistics aren't to say the Explorer is working in a niche, as it was recently noted that the Explorer's premium trim, the Sport, has a higher percentage of Gen X buyers than all other non-luxury brand midsize SUVs in the U.S. market, according to a study by MaritzCX.

Ford's Explorer Sport has been a goldmine when it comes to attracting more affluent Gen-Xers and the Sport generates roughly 15% of the total nameplate's sales since it became available in 2014. Consider that household income for a buyer of the Explorer Sport is $175,000 compared to $112,000 for the average midsize SUV buyer, according to the same MartizCX study.

Ford's Explorer, once one of the company's highest-volume vehicles, has likely driven past its best-selling days. But Detroit's second-largest automaker has done an excellent job of adapting the Explorer to the new reality: optimizing sales of premium trims and options, as well as luring in new demographics, can be just as valuable as more sales.