IBM (NYSE:IBM), which has hiked its dividend annually over the past 16 years and pays a forward annual yield of 3.5%, is often considered a solid income-generating tech stock. Big Blue paid out 36% of its trailing 12 month free cash flow as dividends, which gives it plenty of room to raise its payout in the future. Its trailing P/E of 13 is also significantly lower than the industry average of 21 for IT service providers. 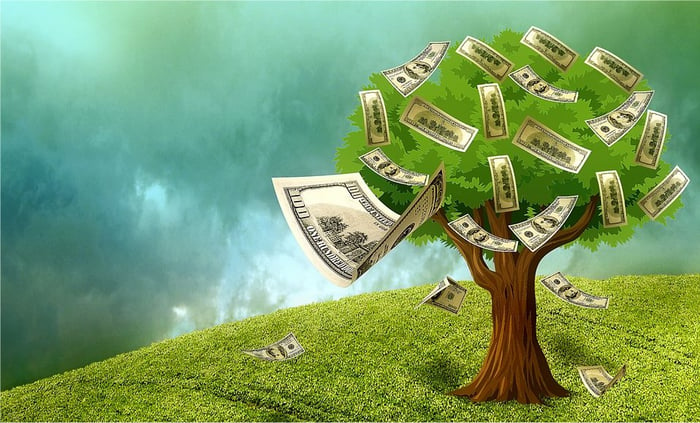 But IBM also suffers a serious problem -- an absence of top- and bottom-line growth due to sluggish enterprise spending, currency headwinds, and a slower-than-expected shift toward higher-growth businesses like cloud, AI, mobile, social, and security services. Its revenue has fallen year-over-year for 17 consecutive quarters, and analysts expect its annual sales to fall almost 3% this year, as well as a half a percent next year. Earnings, which have been boosted by buybacks, are expected to fall nearly 10% this year before possibly rebounding 4% next year.

As a result, IBM's stock price -- which has declined 5% over the past five years -- isn't expected to rise dramatically in the near future. Investors looking for tech stocks with comparable dividends and better growth potential should consider two other stocks instead -- Cisco (NASDAQ:CSCO) and Qualcomm (NASDAQ:QCOM).

Networking giant Cisco's core business of routers and switches, which accounted for nearly half its revenue last quarter, is a slow growth one. During the quarter, sales of routers and switches declined 3% and 5%, respectively, due to weaker enterprise spending, competition from lower-cost rivals like ZTE, and the rise of cloud-based networking solutions that require less physical hardware.

However, Cisco has been using the strong cash flows from those businesses to strengthen its higher-growth collaboration, service provider video, and cybersecurity businesses with bigger investments and acquisitions. Those three businesses posted double-digit sales growth last quarter and accounted for nearly a fifth of Cisco's revenue. Cisco also recently established a new IoT Cloud Business after buying IoT service platform provider Jasper Technologies. By bundling these new services into its routers, switches, and UCS servers, Cisco can widen its competitive moat against less diversified challengers like ZTE.

Analysts expect Cisco's revenue to stay roughly flat this year before rising about 3% next year. Earnings are expected to rise 5% this year before accelerating to an average of 10% annual earnings growth over the next five years. That growth trajectory gives Cisco a fairly low 5-year PEG ratio of 1.3, which is much cheaper than IBM's PEG ratio of 4.2.

Over the past 12 months, Cisco has spent 36% of its FCF on dividends, which is comparable to IBM's payout ratio. Its forward yield of 3.4% is just marginally lower, and it's raised its dividend every year since it was introduced in 2011.

Qualcomm, the largest mobile chipmaker in the world, faced major headwinds over the past two years as it ceded market share to cheaper rivals and first-party chips from leading OEMs like Apple, Samsung, and Huawei. Its patent licensing business, which generates most of its profits, was besieged by OEMs and regulators, which claimed that its fees (up to 5% of the wholesale price of every smartphone sold worldwide) were too high.

Despite those challenges, Qualcomm posted 3% annual sales growth last quarter and broke its four-quarter streak of year-over-year declines. That growth was fueled by robust demand for its top-tier Snapdragon 820 SoC (system on chip), which powers flagship devices like Samsung's Galaxy S7 and Xiaomi's Mi 5. It also signed new patent agreements with major Chinese OEMs to resolve disputed payments, which boosted its licensing revenue. To diversify away from smartphones, Qualcomm has also expanded into new markets like wearables, connected cars, drones, and data centers -- which could all boost its chipmaking revenue in the future.

Analysts expect Qualcomm's revenue to fall 8% this year but rebound 2% next year. Earnings are also expected to fall 8% before accelerating to 11% annual growth over the next five years, giving it a fairly low PEG ratio of 1.3. As for dividends, Qualcomm's forward yield of 3.4% is comparable to IBM's and Cisco's, and it's raised its dividend annually for the past 13 years. It only paid out 46% of its FCF as dividends over the past 12 months, which gives it plenty of room to hike its payout.

Should you buy Cisco and Qualcomm today?

I personally own shares of Cisco and Qualcomm, and I think that they're better income plays than IBM because they offer comparable yields with cheaper valuations. Meanwhile, IBM's upside potential will be severely limited until it can post sustainable top line growth over multiple quarters.