One sound investing strategy is to buy shares of dividend-paying companies that are temporarily out of favor with Wall Street. After all, if the investment community is down on a company's stock, then its share price is likely to be cheap and its dividend yield artificially high. If the company can prove that its business is still fundamentally strong, then investors can bank both a high yield and price appreciation.

With that in mind, here's a list of three dividend-paying stocks that Wall Street hates right now but I think can safely be purchased.

Gilead Sciences (NASDAQ:GILD) shares have been in the discount bin for quite some time now, and it's not hard to understand why. A few years back, the company launched two hepatitis C cures -- Harvoni and Solvaldi -- that grew like wildfire and went on to produce tens of billions in revenue for the company. Now, other pharma companies have caught up and have offered hepatitis C cures of their own. In response, Gilead has been offering its treatments at a discount to maintain market share, which is crushing its growth.

Last quarter, declining hepatitis C revenue caused companywide sales to shrink by 5.7%. Net income plunged by an even sharper 22.2%, and the company even cut its full-year sales guidance to a range of $29.5 billion to $30.5 billion, from its prior outlook of $30 billion to $31 billion.

Shares are now trading for less than seven times trailing earnings as a result, pushing the company's dividend yield to over 2.3%.

However, despite all the doom and gloom, I still believe there are reasons to be optimistic, especially at today's discounted share price.

First, lower hep-C treatment prices are causing reimbursement restrictions to fall away, which could go a long way toward building volume and helping offset pricing concessions.

Second, the company just launched its next-generation hep-C drug, Epclusa, to market. This drug treats all six hep-C genotypes, which eliminates the need for genetic testing ahead of time. That could give it a clinical edge, especially if it launches in international markets.

Finally, there's plenty of optionality ahead in the company's pipeline. Gilead is working on new drugs that could eventually treat cancer, rheumatoid arthritis, and nonalcoholic steatohepatitis. There's also its war chest of more than $24 billion, which could be used for a game-changing acquisition.

Gilead's days of fast growth might be a thing of the past, but with shares trading for so cheap, I think investors can still make good money by buying shares today.

Sales of Apple's iPhone have been on the decline over the past two quarters, causing the market to sell off many companies that count themselves as suppliers. That list includes Skyworks Solutions (NASDAQ:SWKS), a supplier of specialized semiconductor chips. And I think its downturn affords investors a great entry price.

For the record, I'm a firm believer that the vast majority of components suppliers should be avoided completely, but I think that Skyworks is the exception. The company has proved itself to be such an important supplier that it's done something very few Apple suppliers can claim -- grow revenue without sacrificing profitability.

Have a look at the company's gross, operating, and profit margins over the past few years to see what I mean. 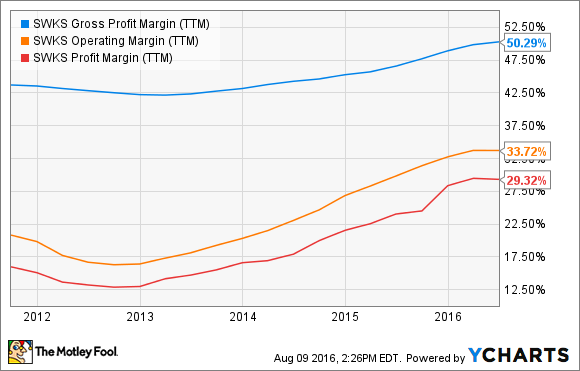 Skyworks is also looking for ways to reduce its dependence on Apple. The company is pushing hard to be a player in the Internet of Things trend, and with each passing quarter it announces new design wins in growth markets such as industrial GPS tracking, smart homes, wearables, and more.

Right now Wall Street is squarely focused on the smartphone market, which is why shares are currently down more than 38% from their 52-week high. That's pushed the company's dividend yield up to 1.7%, a respectable number for a company that's been paying a dividend for only a few years.

While Wall Street is dumping shares because of the smartphone slowdown, analysts still believe that the company's bottom line will grow by roughly 17% over the next five years. That's an incredibly fast rate for a company that's currently selling for less than 11 times next year's earnings.

A pipeline of profits

It's no secret that energy stocks have been mauled over the past 18 months, given the precipitous decline in commodity prices. And yes, there's value to be found in the space. One of my favorite companies from the sector, Kinder Morgan (NYSE:KMI), has taken investors on a wild ride over that period, but with shares currently yielding 2.46%, now could be a good time to jump in.

Kinder Morgan currently claims the title of largest energy infrastructure company in North America. That's because it owns a massive network of natural gas pipelines that crisscross the U.S. and are crucial to bringing supply into markets that have demand.

There's a lot to like about Kinder Morgan's business. For one thing, the vast majority of the company's profits don't fluctuate with the price of oil or natural gas, which gives the company tremendous cash-flow stability. For example, last quarter, cash flow was basically flat year over year and earnings grew by 4%. Those are results that nearly every other energy company would kill to have.

However, Kinder Morgan's share price still hasn't recovered from concerns late last year over its debt load. That ultimately forced the company to slash its payout by 75%, which alienated a huge amount of its investor base that was in the stock solely for income. However, I think it was the right strategic move, as it gives the company flexibility to reduce its leverage, right-size its business, and think about ways to return cash to shareholders once the energy markets fully recover.

The shares are far from risk-free, but the company is expecting to show about $4.7 billion in distributable cash flow for the full year. Compare that figure with its market cap of about $46 billion, and you can still see that the stock is trading at a huge discount. Once the company returns to its history of raising the dividend, I think investors will once again warm up to the stock, so buying today could prove to be profit-friendly.