Please ensure Javascript is enabled for purposes of website accessibility
Log In Help Join The Motley Fool
Free Article Join Over 1 Million Premium Members And Get More In-Depth Stock Guidance and Research
By Rick Munarriz - Aug 15, 2016 at 8:10AM 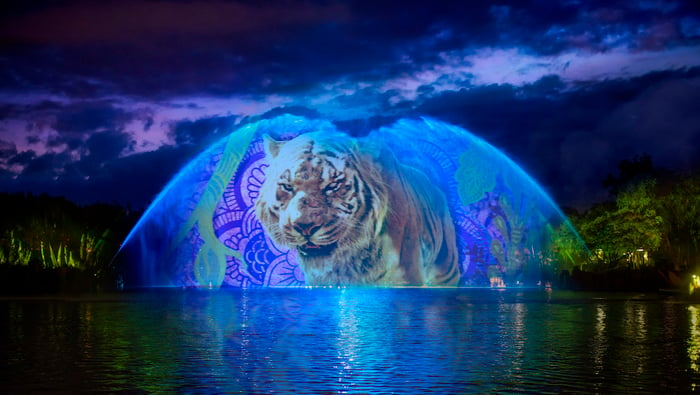 The bold attempt at making Walt Disney's (DIS -0.28%) Animal Kingdom theme park in Florida an all-day and all-night park has run into a seasonal snag. The addition of several nighttime activities that extended the park's close from 8 p.m. to 11 p.m. since Memorial Day weekend will be reversed following Labor Day.

Jungle Book: Alive with Magic -- the riverfront show that's been running twice a night to mixed reviews this summer -- will come to a close after Sep. 5, and with that we'll see the end of the 11 p.m. closing times. Disney plans to keep the nocturnal safaris, nighttime entertainment, and animated Tree of Life awakenings going, but Mother Nature may have other plans.

The park will start closing at 9 p.m. next month, but that will drop to as early as 7 p.m. come October. By the time November rolls around, the posted closings times drop to as early as 6 p.m., and that's even during the otherwise busy Thanksgiving Day weekend.

Sunsets may come earlier later in the year, particularly after clocks get set back an hour in the fall, but there's no way that the Tree of Life renderings will be visible at 6 p.m., and you can't have nighttime Kilimanjaro Safari excursions when the sun is still out.

Disney's Animal Kingdom opened 18 years ago as the fourth and so far final Disney World theme park. It was consistently dead last in attendance until overtaking the now all-but-gutted Disney's Hollywood Studios a few years ago.

The park had ambitious plans heading into Earth Day this year. It had spent the previous year constructing a 5,000-seat amphitheater around a lake that would host a nightly Rivers of Light celebration of nature. Technical glitches would go on to delay the show that was supposed to plant an exclamation point at the end of every day, similar to Illuminations at its sister park Epcot.

The temporary Jungle Book-themed replacement wasn't very impressive, and some of the experiences like the hyped-up Kilimanjaro Safari at night didn't prove as popular as expected given the lack of nocturnal lighting and animal activity. I knew it was a bad sign for Disney -- and a great opportunity for guests -- when I was at Animal Kingdom one night and there wasn't a single line longer than 10 minutes at 8 p.m., with another three hours to go before the park close and an hour before the first of that night's two Jungle Book: Alive with Magic showings.

There was so much that was right about Animal Kingdom at night, but it failed to connect with the masses. This won't be the end of the park's nighttime experiment. Rivers of Light will inevitably open for the holidays later this year -- eight months late, but who will be counting? The opening of the Pandora-themed expansion with two signature yet entirely different rides next year will mandate a return to longer operating hours.

Theme parks account for just 31% of Disney's revenue and a mere 21% of its segment operating profit, but this is clearly an important business for the media giant. Disney's global collection of theme parks attracted 137.9 million guests last year, according to the industry watcher Themed Entertainment Association, and that makes the business a great way to promote its other products. Animal Kingdom will get it right in the coming months, but if it's back to closing at dusk when fall rolls around next year, that's going to be a problem.