Teck Resources Ltd (NYSE:TECK) is a solid turnaround story in the mining space, but it doesn't offer much in the way of income, which might turn dividend investors off. If you are looking for a mining company that offers dividend income, too, you should consider Rio Tinto plc (NYSE:RIO), Alliance Resource Partners (NASDAQ:ARLP), and Royal Gold (NASDAQ:RGLD).

One of the nice things about Teck is that it has a relatively diversified portfolio, consisting of metallurgical coal for steel making (about 35% of revenue), copper (35%), and zinc (30%). It's also in the process of building an oil sands mine in Canada that will add a fourth major commodity to the portfolio. If that diversification is what makes Teck interesting to you, then you should take a look at Rio Tinto, which offers a projected 3.3% dividend yield compared to Teck's 0.5%.

Rio Tinto's business is heavily weighted toward iron ore, which makes up 60% of EBITDA. But it also has notable operations in copper (around 12%), energy (about 9%), and aluminum (roughly 20%). And those are just broad categories; within each there's notable business diversification. For example, energy is largely made up of coal-related businesses, but also includes uranium.

Like Teck, Rio Tinto has been hit by the commodity downturn that started in 2011. Both are working hard to reduce debt while still investing in their businesses. However, Rio Tinto, a much larger company, has been able to weather the industry's headwinds better. The best example of that is Teck's decision to slice its dividend to a token $0.01 a share per quarter. Rio also trimmed its payout, but at this point it plans on paying $1.10 per share this year, after announcing an interim dividend of $0.45 a share (Rio pays dividends twice a year).

So if you're looking for diversification, Rio Tinto is a solid dividend option right now. But what if you like Teck because of its focus on coal? In that case, you might want to take a look at 9%-yielding Alliance Resource Partners. The first thing to note here, though, is that Teck is focused on steelmaking coal while Alliance's focus is thermal coal. That's a notable difference.

That said, Alliance's business is based out of the Illinois Coal Basin. This region has been gaining market share from other coal areas in the United States for several years even as utilities shift their generation portfolios toward natural gas and clean power options. This is one reason why Alliance hasn't followed some of the industry's largest names into bankruptcy court.

That said, Alliance did cut its distribution earlier this year after a decade of annual increases. However, after the cut, the company's distribution coverage was a robust 2.3 times in the second quarter and it expects to cover the payment by at least two times through the remainder of the year. Put another way, the company has plenty of cash to cover the disbursement.

According to CEO Joseph Craft, the cut was more about appeasing capital market participants, thereby assuring the company had access to capital if needed, than because of financial shortfalls. At the end of the day, Alliance is a one-trick pony compared to Teck. But, it performs that trick really well. If income is your goal, Alliance should be on your short list.

The last alternative to Teck is gold-focused Royal Gold and its 1% dividend yield. It isn't all that much more exciting than Teck's roughly 0.5% yield except for one thing...Royal Gold has increased its distribution each and every year for a decade and a half. So, if Teck's dividend cut spooks you, but you still want a miner, Royal Gold might be worth a deep dive. 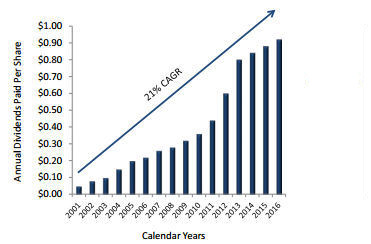 The thing is, Royal Gold isn't a miner. It's a streaming and royalty company. What that means is it pays miners cash up front for the right to buy gold and silver at reduced rates in the future. It's more like a specialty finance company that gets paid in precious metals. Baked into the business model are low costs, which helps explain why Royal Gold has been able to increase its dividend throughout the deep downturn in the precious metals space.

In fact, the downturn has been a veritable (pardon the pun) gold mine for the company. Miners have been desperate for cash to shore up their balance sheets the last couple of years, allowing Royal Gold to ink a large number of streaming deals. For example, it was able to increase its reserves by 20% last year. And with precious metals prices on the upswing this year, Royal Gold looks like it's in good position to keep that dividend streak going. So if consistency is your goal, Royal Gold is a solid, though not high yield, option.

Teck is looking good, but there are other options

Teck is a perfectly fine company with some turnaround appeal as commodity markets strengthen and it builds out its oil business. However, the meager dividend, and the big dividend cut that led to the low yield, could turn income investors off -- which is why you might be interested in mining giant Rio Tinto, coal-focused Alliance Resource Partners, and the steady dividend payer Royal Gold. Each offers a slightly different income profile and business makeup, but all are worth looking at if you're looking for better dividend stocks than Teck.