Electric-car maker Tesla Motors (NASDAQ:TSLA) was the first company to market with a fully electric vehicle boasting over 200 miles of range. And it turned out to be a sweet spot. With its Model S now outselling all comparably priced sedans in Tesla's key markets and the Model 3 garnering 373,000 deposit-backed reservations just 15 days after its unveiling earlier this year, the 200-mile barrier has clearly resonated with consumers. Competitors, too, seem to be acknowledging how compelling long-range electric cars are, with a handful of major automakers announcing plans for their own versions of electric cars with Tesla-like range.

But Tesla appears determined to keep pushing its battery technology further. There's good reason to believe the company is readying a significant capacity upgrade for its Model S and X: a 100-kilowatt-hour battery, or a battery 10 kilowatt-hours larger than its largest pack offering today.

Tesla recently received official approval for a 100D version of the Model S and X in Europe, according to Kenteken.tv ("100" stands for the kilowatt-hours of battery capacity, and "D" stands for "dual motor"). The approval for Tesla to manufacture and sell the vehicle in the European Union was discovered in an open database by the Dutch authority responsible for vehicle registrations, called RDW.

"RDW is appointed by Tesla Motors Inc. to perform Tesla's type approval process for the whole vehicle," reads Kenteken's post about the discovery.

While the approval by RDW for a 100D version of Model S and X seems to confirm Tesla's plans for vehicles with larger battery packs, there's an even better reason to expect the larger pack capacity: In March, Tesla CEO Elon Musk complimented a hacker, named Jason Hughes, who discovered a cryptographic message in the Tesla 7.1 firmware denoting a "P100D" ("P" stands for the performance version of a 100D). In addition, the hacker identified a badge for "P100D" in Tesla firmware.

When Tesla first brought the Model S to market, the highest battery capacity option was 85 kWh, getting the car 265 miles of driving range on a single charge. Since then, however, Tesla has meaningfully increased the maximum range for the Model S twice. First, in late 2014, it boosted Model S's potential range with a dual-motor option, which more efficiently managed energy. Then, last year, Tesla introduced a 90 kWh battery option, which pushed Model S to 294 miles of EPA-rated range per charge. 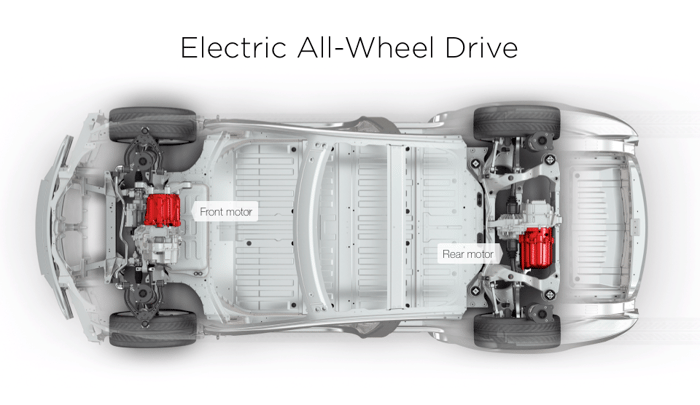 But a new 100 kWh battery pack should easily get the Model S's range on a single charge beyond 300 miles, highlighting the electric-car company's relentless effort to boost the energy density of a battery pack size it started delivering to customers with its first Model S units in 2012.

To be fair, Tesla did introduce a retrofit battery upgrade option for its original Roadster sports car, which will boost the vehicle's range by about 35%, to 340 miles. So, technically, Tesla has already surpassed the 300-mile mark. But given how small the two-door vehicle is, and that there are only a few thousand of them on the road, it's not as notable of an achievement as the company's progress with batteries for its Model S -- and now Model X -- over the years.

Interestingly, when Tesla introduced its 90 kWh battery option last July, Musk provided a glimpse into the company's expected road map for range improvements over time. The automaker predicts that pack capacity will increase by "roughly 5% per year," Musk said. He was even confident enough in this prediction to advise owners of the Model S with 85 kWh battery capacity to refrain from upgrading to a 90 kWh battery, since he anticipated that better options weren't too far out.

If a 100D truly is in the works, Tesla's aggressive efforts to increase the energy density of its batteries would highlight both the company's ongoing lead in long-range electric vehicles and further support Musk's prediction for battery capacity to increase by about 5% annually, on average.