Shares of Apple (NASDAQ:AAPL) have fallen 7% over the past 12 months due to ongoing concerns about its slowing hardware sales and lack of game-changing new products. The bearish thesis usually consists of three main arguments: Sales of iPhones, iPads, and Macs are all declining year-over-year, services (14% of its revenue last quarter) aren't growing fast enough, and Apple's long-term road map is unclear.

While those are all valid points, the worst mistake Apple investors can make today is to sell on those weaknesses without considering its income-generating potential. Let's take a closer look at Apple's dividend and why its yield could keep growing over the next few years.

Apple paid a dividend in the late 1980s and early 1990s, but those payments were halted in 1996 as its free cash flow plunged to negative levels. Apple brought back the dividend in 2012, presumably to allay concerns about its growth following the death of Steve Jobs in 2011.

Apple has hiked that payout every subsequent year with an average annual increase of about 11%. Its most recent hike boosted the quarterly payout by nearly 10% to $0.57 per share, which equals a forward annual yield of 2.1%. Over the past 12 months, Apple spent 24% of its $50 billion in free cash flow (FCF) on dividend payments.

Other tech giants pay higher dividend yields but generally have higher payout ratios. Microsoft (NASDAQ:MSFT) pays a forward yield of 2.5%, but it spent 44% of its FCF on dividends over the past year. IBM (NYSE:IBM) has a forward yield of 3.5%, but its dividend gobbled up 36% of its FCF during the same period. This means that Apple has a lot more room to raise its dividend to "mature" tech stock levels.

How much could Apple's dividend grow?

If Apple spent 40% of its FCF on dividends, it could boost its yield to 3.5% -- which would be much higher than the S&P 500's average yield of 2% and attract more income investors. That yield, along with its current P/E of 13 (which is lower than the industry average of 17), would also set a firmer floor under the stock price.

However, the naysayers will likely note that Apple's FCF has actually been declining since peaking in the second half of 2015. This was caused by slower hardware sales and higher spending on R&D and acquisitions. 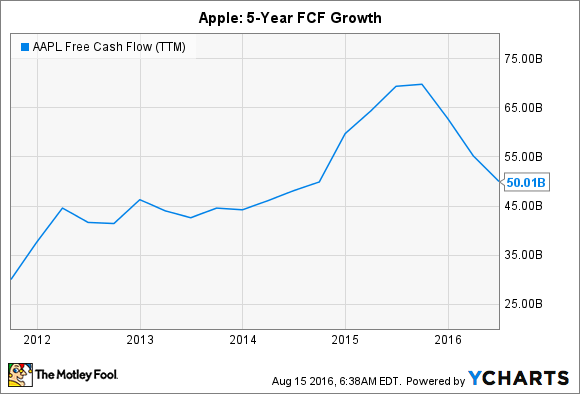 Since those trends are widely expected to continue, Apple's FCF will likely decline further over the next few quarters. This has raised concerns that Apple could be doomed to repeat its mistakes of the early 1990s, when it killed its cash flow by spending billions on R&D and investments without creating bankable products. That's why Apple discontinued its original dividend, and why the company only recovered after Steve Jobs returned as its interim CEO in 1997.

Don't forget about its overseas cash

But this time around, Apple has a lot more cash than meets the eye. It holds $18 billion in cash and equivalent domestically, but about $215 billion remains overseas. The company refuses to repatriate that cash to the U.S. to fund buybacks and dividends, since it would be hit with a corporate tax rate of at least 35%. Instead, Apple prefers to utilize low interest rates and fund buybacks with debt.

If the U.S. lowers its corporate tax rate after this election cycle, Apple might bring that cash back home. That game-changing move would dramatically bolster its ability to repurchase stock, raise dividends, and acquire domestic companies without worrying about its cash flow.

Think of Apple as an income investment

Many long-term Apple investors might want to sell the stock because its iPhone-fueled growth cycle is coming to an end. Analysts expect Apple's revenue and earnings to respectively fall 8% and 10% this year, so the stock won't likely deliver comparable returns as previous years.

But before you sell, make sure you don't overlook Apple's ongoing evolution into a dividend-growth stock. If you do, you might give up a stable income stock -- a sound defensive holding for volatile markets.