Investors in casino giant Wynn Resorts (NASDAQ:WYNN) have gone through a tough couple of years. After enjoying years of impressive growth stemming from the success of the Asian gaming capital of Macau, Wynn took one of the hardest hits in the casino industry when Macau went through a major downturn. After more than two years of deteriorating performance, Macau has only now started to show signs of bottoming out, and Wynn took the dramatic step of reducing its dividend in an effort to conserve cash and put shareholder capital to better use.

Now, some shareholders are more hopeful about Wynn's future, and they want to know when the company might restore at least part of its lost dividend payments to investors. Let's look more closely at Wynn Resorts to see whether investors should expect a dividend hike for the casino giant at some point next year.

Overall, Wynn Resorts has offered shareholders solid dividend income over time. Historically, the casino giant favored large one-time payouts, with special dividends of $6 per share in both 2006 and 2007 helping to augment already-impressive share-price appreciation. The company took a break from dividend payments during the 2008 financial crisis but returned in late 2009 with a $4 per share payout, and then doubled it with $8 per share in special dividends in 2010.

2010 also brought the initiation of a regular dividend. Starting modestly at $0.25 per share quarter, Wynn doubled the payout to $0.50 the following the year, and then increased it to a full $1 per share quarterly in 2013. Subsequent $0.25 per share increases in 2014 and early 2015 demonstrated what many believed to be a further commitment to shareholders. 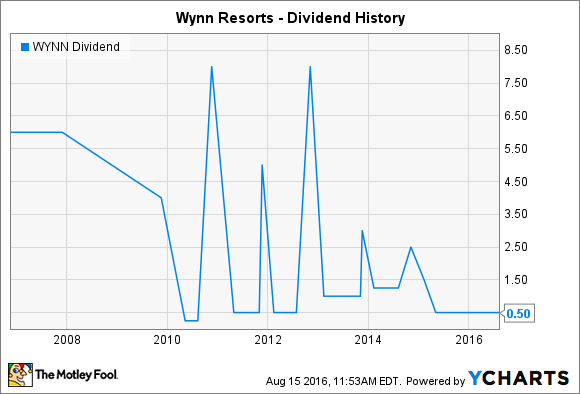 However, in April 2015, Wynn announced it would cut its quarterly dividend by two-thirds, returning to a $0.50 per share payout. After years of falling revenue and operating earnings, CEO Steve Wynn repeated his view that he didn't want to have the company sustain its previous dividend purely by using debt financing. As the CEO sees it, such moves can conceal deteriorating corporate fundamentals, and that's not something Wynn is interested in doing.

Wynn also has major expansion plans. The new Wynn Palace on the Cotai Strip in Macau has already put huge capital demands on the company, and it will take some time to reach full profitability. In addition, the proposed casino outside Boston is a lot earlier in the development process, and keeping plenty of untapped capital on hand should help Wynn avoid any negative impact from unforeseen challenges with that project.

At this point, Wynn Resorts is paying out a respectable portion of its earnings to shareholders as dividends, with the current payout ratio exceeding 60%. That doesn't bode well for regular-dividend increases in the immediate future, largely because Wynn would likely be reluctant to make a boost of anything less than a quarter per share, and doing that now would push the payout ratio into dangerous territory.

However, Wynn has a couple of longer-term options. First, many expect a huge bounce in Wynn earnings next year, with some forecasts exceeding $5 per share. That would support a $0.25 per share increase to $0.75 per share without adversely affecting the payout ratio -- as long as the earnings gains actually occur.

The other possibility is that Wynn could return to its special-dividend policy. Paying out $1 to $2 per share in special dividends in combination with regular dividends would give Wynn shareholders some reward for sticking with the casino giant while also helping the company maintain flexibility in its capital policies.

Wynn Resorts has treated shareholders well for a long time, and the company has done a good job, even through tough times of finding ways to reward investors. If the business rebounds for the rest of this year and next, shareholders should expect Wynn to find a way to share the gains with its investors.

Will Wynn Resorts Raise Its Dividend in 2017? @themotleyfool #stocks $WYNN Next Article
Current