The second quarter of 2016 represented a new beginning for Frontier Communications (OTC:FTR).

It was the first quarter the company would be reporting results since it had finished its $10.54 billion acquisition of systems in Texas, Florida, and California from Verizon (NYSE:VZ). The deal, which completed on April 1, gave the company 3.3 million new voice connections, 2.1 million broadband connections, and 1.2 million FiOS additional video subscribers.

The completion of the Verizon purchase was a transformative one for the company. It more than doubled Frontier's size and it turned it from a tiny player in video and broadband to an emerging, middle-of-the-pack provider.

Going forward, it's fair to say that how the company integrates the Verizon properties, and whether or not it can hold onto customers while adding new ones, will determine Frontier's survival prospects. CEO Dan McCarthy and CFO John Jureller talked a lot about the purchase and its integration during the company's Q2 earnings call, which was transcribed by Seeking Alpha. 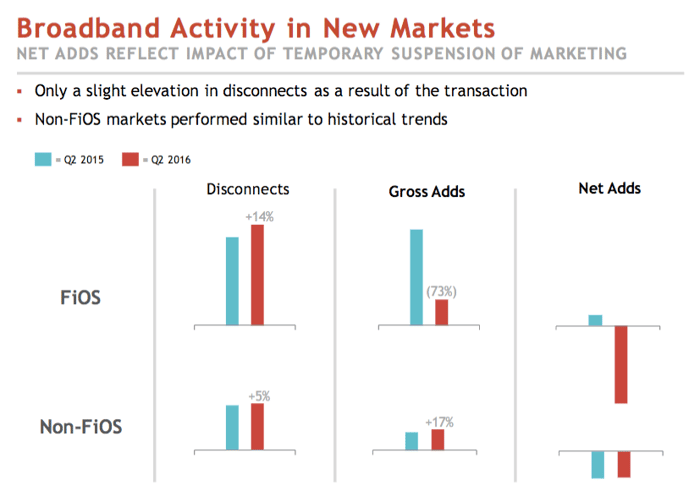 One of the major reasons a cable and internet company wants to get bigger is that having more customers does not increase infrastructure on a one-for-one basis. Yes, Frontier may need more customer service people, but it won't need a second marketing boss, nor will it need additional cable box platforms.

McCarthy explained during the call that the savings appear to be better than expected:

Following the successful cutover of the newly acquired assets, we achieved annualized integration cost synergies of $1 billion in the second quarter. This is a substantial outperformance relative to our original day one target of $525 million. We have also raised our total synergy target to $1.25 billion, which is considerably above our prior $700 million target.

The increased savings actually compensated for the fact that the company took in less revenue on its new customers than expected.

Nothing big is going to change

While the brand name has changed for the former Verizon customers, McCarthy made it clear that efforts have been put in by his company not to rock the boat. "We have been very disciplined in our approach to operating the new markets," he said, "This included maintaining customer pricing and keeping promotions in line with those that Verizon offers in these markets."

In addition, Frontier is using retention offers, which are similar to the ones Verizon had in place. It's also managing the expiration of promotional pricing in roughly the same way its predecessor did.

Marketing is coming back

In April, when Frontier took over the Verizon territories, it stopped all marketing efforts to add new customers. That made sense given that the complexity of the switch guaranteed there would be problems, which made it a bad time to expose new users to the service.

McCarthy noted that stopping all marketing efforts impacted gross additions, but he said things have since returned to normal:

We are now back to a typical level of marketing in the new properties and all customer service calls are now being handled domestically. As a result, we have seen an improvement in gross adds and expect this to reach normalized levels as we continue through this quarter.

Going forward, the ability to add customers, or at least hold onto a similar amount it bought, will be one of the most important metric the company will be judged on. If it spent $10.54 billion buying users and sees them slowly leave, the result would be disastrous.

Some numbers are getting better

Frontier has slowly been losing subscribers for the past few quarters, but Jureller said the trend was moving in the right direction in Q2:

Our residential customer churn decreased to 1.7% from 1.8% and broadband net additions increased 3.5% to 25,500. We anticipated that as we rollout greater speed capabilities in the existing markets and increase the availability of video, our net addition trend should be further enhanced, both through improved gross additions and reduced churn.

It's too early to tell

With the Verizon deal only one quarter old, what's clear is that while there are some positive signs, it's too early to make any judgments. The increased savings are positive, but the company has to prove it can add customers while also holding onto the ones it paid for.

That is a particularly challenging problem for Frontier because not only does it face entrenched competition in every market, it also faces a video industry in a slow state of decline. Broadband has been a growth area for its key rivals, and for this purchase to work for the upstart company, it needs to make gains in that area as well.